Puttin' on the Ritz 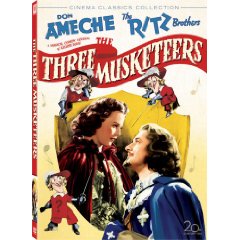 Attentive readers will recall that last week we got into a spirited discussion of the relative merits of Wheeler and Woolsey (who I described as possibly the least funny comedy team ever) and the Ritz Brothers, whose 1939 The Three Musketeers (directed by the great Allan Dwan) I suggested was a minor comic masterpiece. At the risk of flogging a deceased equine, here's a clip that may help prove my point. The set-up is simple: The Brothers -- cowardly kitchen lackeys who D'Artagnan (Don Ameche) has mistaken for the titular Musketeers -- are rescuing the hero from the clutches of the evil Lady De Winter (the majestic English actress Binnie Barnes).

Okay, it's not The Marx Brothers' crowded stateroom scene, but it should give you some idea of how deftly the film balances knockabout slapstick and swashbuckling derring-do. I should also mention that director Dwan benefits from superb studio system casting -- Gloria Stuart is the Queen, the great Miles Mander is a scheming and sinister Cardinal Richelieu, plus there are spectacularly slimy villains including Lionel Atwill, Douglas Dumbrille and John Carradine. The Ritz' two musical numbers are also to die for, including the hilarious "Chicken Soup" song (neither of which, alas, is yet on YouTube).

In short, as I said, a minor comic masterpiece. Fox's 2007 DVD version, I'm happy to say, was beautifully transferred from a pristine print; you can (and should) order it here.

Oh -- and Wheeler and Woolsey still suck. So there.