DVD Event of the Week: Is it the latest bunch of 40s noirs from the Fox vaults -- Moontide, Boomerang!, and Road House? Is it VCI's box set of Honey West: The Complete Series, starring bemoled beauty Anne Francis? Or is it Universal's The Office: Season Four, starring Steve Carell?

All worthy, to be sure, but for my money it's the Criterion Collection's stunning new batch of Max Ophuls classics -- La Ronde (1950), Le Plaisir (1952), and in particular, from 1953 the astounding The Earrings of Madame De....

Set in the 1890s and based on a novella by Louise de Vilmorin (thoughtfully included in Criterion's accompanying booklet) Madame De... is the story of a beautiful aristocratic woman (the beautiful aristocratic Danielle Darrieux) who -- for reasons never made completely clear -- pawns the titular jewels unbeknownst to her distant husband (Charles Boyer) and sets off a chain of events that will surprise no one by ending badly. It's all very Guy de Maupaussant-ish, and the oh-so-French romantic fatalism could easily seem silly if Ophuls didn't tell the story with such enormous conviction and dignity. More to the point, there's isn't a shot in the film that isn't visually remarkable, with a constantly moving -- prowling is more like it -- camera that continually illuminates the characters psychological life, and some scene to scene transitions that will make your jaw drop; the obvious comparison is Orson Welles, and indeed, this is very much like a Gallic Ambersons or Kane. In short, a great film. Criterion's razor sharp transfer looks like the thing was shot yesterday; typically excellent bonus features with the package include a video intro by There Will Be Blood director Paul Thomas Anderson and an essay on Ophuls by critic/fan Molly Haskell. Not to be missed (and have I mentioned that the La Ronde and Le Plaisir sets are almost as good?) 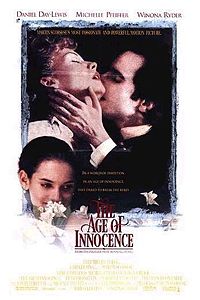 5. The Age of Innocence (Martin Scorsese, 1993)
Some people didn't think Scorsese was a good fit with Edith Wharton, at least in terms of sensibility; I'm agnostic on that, but there's no question that strictly in the abstract this is a ravishingly beautiful film.

4. Becky Sharp (Rouben Mamoulian, 1935)
The first feature film in three-strip Technicolor. Eyepopping isn't quite the word for it, and Hopkins looks gorgeous in the period clothes. So does Alan Mowbray, come to think of it.

3. Gone With the Wind (Victor Fleming, 1939)
Pretty much unarguable, I think. MGM glitz at it's most opulent and overwhelming.

2. The Three Musketeers (Richard Lester, 197 )
Yes, it's a great swashbuckler, but it's also a series of period paintings come to astonishing life. I actually think this one and the sequel are the films Lester should be remembered for, not A Hard Day's Night, splendid as it is.

And the all-time coolest looking period flick, it's not even close so don't give me a hard time or swear to god I'll smack you, is obviously --

1. The Wizard of Oz (Victor Fleming, 1939)
Not strictly speaking a costume drama, I know, but there's such a great anecdote in Aljean Harmetz' The Making of the Wizard of Oz (1977) that I can't resist. Seems that an MGM wardrobe man on Oz bought a whole rack of coats from a second-hand store in downtown L.A.. Director Fleming and Frank Morgan, who played the Wizard, pulled one off the rack and decided it was perfect for his character. But when Morgan turned the pocket out, it said "L. Frank Baum".

"We wired the tailor in Chicago," said Mary Mayer, the Oz unit publicist, "and sent pictures. And the tailor sent back a notarized letter saying that the coat had been made for Frank Baum. Baum's widow identified the coat, too, and after the picture was finished, we presented it to her. But I could never get anyone to believe the story."