DVD Event of the Week: Is it Paramount's stunning new box set The Godfather: The Coppola Restoration, featuring gorgeous new transfers of all three classic gangster epics? Is it New Line's expanded version (twelve minutes of extra footage) of Sex and the City: The Movie? Or is it perhaps Criterion's Aki Kaurismaki's Proletariat Trilogy, showcasing three features by "the Finnish master of comically understated melodrama"? (I just love that phrase).

All worthy, to be sure, but allow me to rave instead (as promised last week) about Fox Horror Classics 2, a fabulous box set marking the home video debut of Chandu the Magician, directed by the insanely brilliant William Cameron Menzies.

Menzies, who started in silent films (a frequent collaborator with Douglas Fairbanks) and worked well into the Fifties, is, of course, is on anybody's short list of greatest art director/production designers in movie history -- he'd be an immortal if he'd never done anything besides the silhouette of Viven Leigh against the tree at the end of the first half of Gone With the Wind. But he also directed a variety of interesting films, with wildly varying budgets, over the years and Chandu is one of the most stylish. Based on a popular kids radio show of the day (1932), it's your basic evil-lunatic-with-a-death-ray movie, with a great villain (the pre-Dracula Bela Lugosi), a nicely hammy hero (John Barrymore simulacrum Edmund Lowe), an overlay of amusing faux Eastern mysticism, and, of course, gorgeous trick Egyptian landscapes and art deco laboratories all bearing Menzies distinctive visual touch. 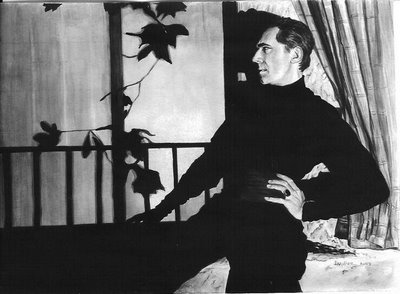 As I mentioned, it's never been on home video before, and Fox's transfer comes from a good quality print digitally restored to a fare-the-well (you can see side by side frame comparisons in one of the disc's excellent bonuses). Even better, FHC2 also includes two other eminently worthy fright flicks making their DVD debuts. The better known is Dragonwyck, a nicely creepy 1946 Gothic romance starring Gene Tierney and Vincent Price that also happens to be the first directorial effort from All About Eve auteur Joseph L. Mankiewicz. The more interesting is Dr Renault's Secret, a deliriously over the top A-picture with the soul of a B from 1942, starring the great J. Carroll Naish as a mad scientist obsessed with turning an ape into a human, thus prefiguring the Bush administration (sorry, couldn't resist). Both of these also come with interesting bonuses (theatrical trailers, making-of featurettes, etc) but the coolest stuff is on the Dragonwyck disc, including two vintage radio versions of the story starring Price, and an isolated audio track of the film's musical score (by Alfred Newman).

Bottom line: You can (and definitely should) order it here immediately.

Coolest Feature Film Adapted From a Source Other Than a Novel, Short Story or Play!!! 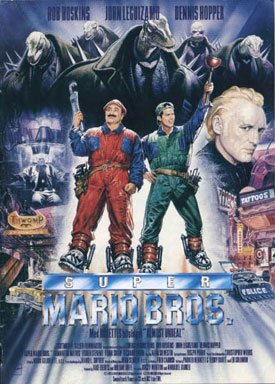 5. The Night the Lights Went Out in Georgia (Ronald F. Maxwell, 1981)
From Vicki Lawrence's 1972 hit record of the same name. The film has next to nothing to do with the plot of the song, but on the plus side it's a much better than average Macon County Line rip-off than anybody expected, with nice work by Mark Hamill as a jealous deputy sheriff.

4. Super Mario Brothers (Rocky Morton and Annabel Jankel,1993)
The first feature adapted from l'ouevre de Nintendo. Fans actually bitched because Dennis Hopper's character was descended from a T-Rex, rather than a turtle as in the game.

3. Barbarella (Roger Vadim, 1968)
Not, perhaps, the best comic book adaptation of all time, but without question the only one with Jane Fonda undressing in zero-gravity.

2. Gunga Din (George Stevens, 1939)
From the Kipling poem, obviously, and still one of the most exhilirating adventure movies ever made. A product of Hollywood's annis mirabilis, unsurprisingly.

And the all time coolest film adapted from a non-traditional source, you gotta be kidding it's not even close so don't give me a hard time, obviously, is --