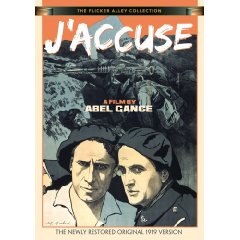 DVD Event of the Week: Is it Warner Brothers' new Blu-Ray high-def set of the Cinerama How the West Was Won, featuring a John Ford civil war sequence some have called his masterpiece? Is it Universal's 40th anniversary two-disc version of the Coen Brothers' The Big Lebowski, packaged in a limited edition miniature bowling ball? Or is it Buena Vista's five disc set of Grey's Anatomy: The Complete Fourth Season?

All worthy, to be sure, but for my money it's Flicker Alley's remarkable two-disc restored version of Abel Gance's 1919 anti-war classic, J'accuse.

Gance, who was rediscovered in the 80s largely thanks to the pioneering efforts of film historian Kevin Brownlow (who contributes an essay to the booklet accompanying the new set) was a truly remarkable and visionary filmmaker, a man who combined thoroughly old fashioned 19th century notions of drama with absolutely avant-garde technique; far more than even a contemporary like D.W Griffith, he truly understood the absolute freedom the medium of cinema could offer a storyteller. J'Accuse is one of his early masterpieces, perhaps not fully realized, but with magnificent and often astonishing sequences that ultimately came to fruition in his 1927 Napoleon. It's a passionately pacifist film (Gance lost ten friends in WWI), and profoundly visual; you know you're in the presence of a master from the opening credit scene, as the words of the title explode across the screen and you suddenly realize they're being spelled out by the bodies of soldiers. (Later sequences were actually filmed in the trenches during the battle of St. Mihiel, and the climactic March of the Dead sequence was shot with real troops on leave from the front, most of whom were killed within the next few weeks). 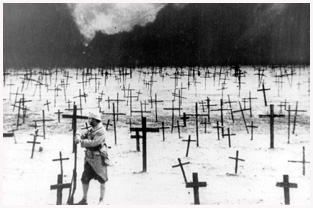 The film was later re-edited (badly) for American release in 1921; Flicker Alley's gorgeous new version is by far the most complete and best looking seen since the film's premiere, with most of the original title cards (there's an optional set of English subtitles), the original tints, and a terrific new chamber orchestra score by Robert Israel. Interesting extras with the package include two short films, Paris During the War, with amazing location footage of the city in 1915, and Fighting the War, featuring authentic photography from the frontlines in 1916. You can (and most definitely should) order it here now.

5. Gallipoli (Peter Weir, 1981)
An incredibly harrowing restaging of one of most harrowing episodes in Australian military history. Memorable anti-war stuff; this put both the director and star Mel Gibson on the international map, and deservedly.

4. Wings (William Wellman, 1927)
A small town love triangle with Clara Bow as the girl next door (yeah, right) sets off a chain of events that leads Richard Arlen and Buddy Rogers to enlist as fighter pilots against the Treacherous Hun. The first film to win a Best Picture Oscar, and it holds up surprisingly well.

3. Paths of Glory (Stanley Kubrick, 1957)
Kirk Douglas pits the dimple in his chin against the evil French generals (notably the slimy Adolphe Menjou and the incredibly slimy George Macready) who kangaroo court a couple of hapless grunts to death to cover up their own incompetence. Absolutely devastating, and perhaps the one Kubrick film where the director lets his emotional guard down.

2. Grand Illusion (Jean Renoir, 1937)
Eruopean class conflicts, the futility of war, the rise of Fascism and much more as seen through the prism of a German POW camp run by the aristocratic Erich Von Stroheim (never better). One of the greatest films ever made, frankly. 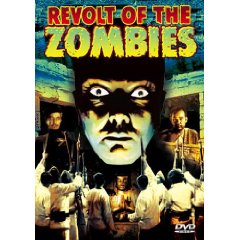 And the all-time most memorable WWI-themed flick, it's not even close so don't give me a hard time or swear to god I'll smack you, is obviously --

1. Revolt of the Zombies (Victor Halperin, 1936)
On the Franco-Austrian Frontier during WW I, an Asian chaplain of a French colonial regiment, imprisoned because he possesses the power of turning men into zombies, is murdered by a mad colonel who uses the secret to start a zombie cult in post-war Cambodia. After that, it gets totally unbelievable. Dean Jagger's in it, but he's not much of a help.