Really Great Lost Films of the 80s (An Occasional Series) 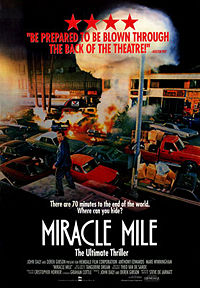 Pop quiz: What's the best end of the world film ever?

Well, with all due respect to fans of On the Beach, Deep Impact, or even the presumed lost until recently 1933 F/X classic Deluge, I say -- no way. Regular readers, of course, at this point are expecting me to get all snarky and ironic about some crappy piece of cheese featuring giant mutant frogs or something, but for a change I'm being dead serious -- for my money, the end of the world film that really behooves re-evaluating is writer/director Steve De Jarnatt's 1988 cult fave Miracle Mile.

Everyman trombone player Anthony Edwards (pre-ER) has a date with the love of his life, Mare Winningham, but in an eerie Pynchon-ian accident, he oversleeps and gets to the greasy spoon diner where she toils hours too late. When he picks up a wrong number at the pay phone outside, an anguished voice tells him that missiles have been launched and he has only seventy minutes before nuclear apocalypse. Panicked, he enlists some of the diner regulars in an attempt to find Winningham and get out of town -- to where? how? -- before the world ends.

All of this takes place more or less in real time and becomes increasingly hallucinatory and haunting as the night goes on, culminating in a penultimate almost Boschean sequence with the city seemingly gone mad. Good as that is, though, De Jarnatt tops it with a downbeat but weirdly poetic finale --a rooftop Liebestod, as the missiles descend into the hazy glare of the LA sunrise, that nobody I know who has seen it has ever been able to shake. (Ditto the synth score by Tangerine Dream, which adds immeasurably to the film's mood of things falling apart).

In short, a great film that deserves to be much better known, as does its auteur, who has mainly toiled in television since. Here's the trailer, which should give you at least some idea of how rich and strange the film actually is.

A quick trip over to Amazon just revealed that MM is in fact available on DVD, but to my dismay apparently only in a full frame, rather than letterboxed, version, which would seriously compromise De Jarnatt's impressive widescreen compositions. Hopefully, somebody at MGM home video will rethink this sometime soon; in the meantime, compromised or not you really need to see the film and you can (and definitely should) order it here.

Totally off subject here, but a major DVR alert for tonight (assuming you're not still atoning your little heart out for Yom Kippur):

There's a Jacques Tati birthday celebration on Turner Classic Movies this evening (if you've never seen a Tati film, he's essentially a Gallic Chaplin or Buster Keaton for the Age of Anxiety, and his films are little marvels of comic invention.) The marathon begins at 8pm EST with Jour de Fete (1949), with Tati as a French postman in a rural town invaded by a carnival. It continues, at 9:45 with Mr. Hulot's Holiday (which introduced his trademark character), followed by Mon Oncle (1958), an Oscar winner for Best Foreign Language Film, at 11:15, and concludes at 1:15 with Playtime (1967), his widescreen masterpiece. In a word: Pounce.