A next-to-last postscript to my Paris trip: Along with American hits like W., Body of Lies, and the immortal High School Musical 3, the movie that was being hyped the most last week was the homegrown Magique, directed by noted miscreant Phillipe Muyl. You couldn't walk two blocks without seeing this image -- 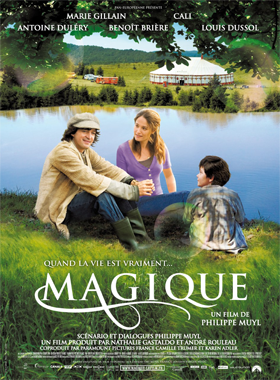 Now, there is a school of thought, to which I sometimes subscribe, that French Cinema as we knew it has been dead since the commercial breakthrough of the satanic innovative Luc Besson, specifically since 1990 and his world-wide hit La Femme Nikita.

Well, that's as may be, but after watching the trailer for Magique...

...it's fairly obvious that Les Cahiers du Mickey Mouse are alive and well in the land of the Ignoble Frog.