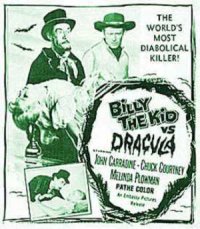 And speaking as we were yesterday of the frightening possibility of a Dracula film directed by Speed 2 auteur Jan de Bont, my thoughts turned, perhaps inevitably, to what might be the absolutely worst film ever about the bloodsucking Transylvanian.

I refer, of course, to the 1966 classic Billy the Kid Versus Dracula, whose plot (like that of yesterday's nominee Dracula's Dog) is more or less completely summed up by its title.

Here's a clip from the film's big finale. You'll note that the titular Kid manages to dispatch the Count (John Carradine, never better) merely by throwing a gun at his vampire puss.

It should also be noted that the film is directed, with characteristic lack of artifice, by Bowery Boys auteur William Beaudine, who stages many of Dracula's big scenes by shining a red flashlight on his face, an effect that one critic noted "“makes Carradine look like he’s mesmerizing a rotisserie chicken."

Of course, while pondering BTKVD my mind strayed momentarily to another meshugennah vampire flick -- the 1972 exploitation hit Blacula, starring the great African-American actor William Marshall (Dr. Richard Daystrom on the classic Star Trek episode "The Ultimate Computer"). Marshall, sad to say, seemed to feel the title role was beneath him, famously telling a reporter that "The tragedy is that I only got the part because I'm black." (Esquire Magazine, in their Dubious Achievements issue that same year, noted "Funny -- we thought it was because you looked good in a sweater.")

In any case, you can (and should) order the DVD version of BTKVD here; if, while you're there, you are also moved to look for Blacula it should remain between you and your conscience.