Just heard that Turner Classic Movies has scheduled a Paul Newman memorial movie marathon for October 12th. This is only fitting and proper, and you can peruse the schedule here, but I'm saddened if not surprised to see that TCM will not be airing my personal, admittedly perverse, favorite among Newman's films.

I refer, of course, to the totally meshugennah 1954 Biblical epic The Silver Chalice.

A Greek artisan named Basil (Newman) is commissioned to cast a silver cup to house the Holy Grail and travels to Jerusalem and eventually to Rome to complete the task. Meanwhile, evil magician Simon Magus (Jack Palance, devouring any scenery in his path) is trying to convince the crowds that he is the new Messiah by using tricks cribbed from David Copperfield. Virgina Mayo is on hand as Helena, the most popular hooker courtesan of the Roman Empire (played by the young Natalie Wood in childhood flashback) and Lorne Greene is in there somewhere as Saint Peter. 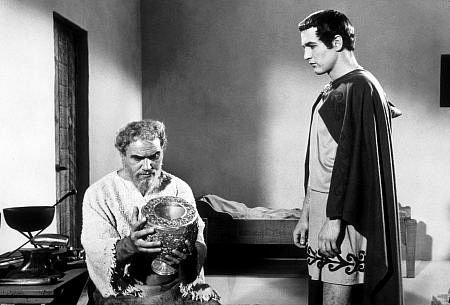 The above description really doesn't do justice to TSC's surpassing oddness. For reasons that remain unclear, director Victor Saville chose to stage the thing -- in widescreen, no less -- against deliberately unrealistic flat painted backgrounds; essentially, the film is art-directed as a bizarre, very skinny cross between the Aubrey Beardsley illustrations for Wilde's Salome and the episode of Star Trek where the crew of the Enterprise is transported to a version of Tombstone, Arizona that looks like a half-finished movie set. Add to that incredibly cheesy dialogue, a thick overlay of risible Victorian melodrama, and the fact that Newman (in his film debut) looks profoundly uncomfortable without pants, and you have if not quite a camp hoot like its contemporary The Robe then at the very least a splendid example of Le Bad Cinema.

It is perhaps worth adding that when The Silver Chalice played on network TV in 1966, Newman famously took out ads in the trade papers apologizing for his performance and imploring people not to watch it. It didn't work at the time, but since there hasn't been a home video version since an early 80s VHS release, it seems that Warner Brothers may be respecting his wishes. Needless to say, however, if TCM decides to air it at some point down the line, you should keep your TiVo's at the ready.