Those who know me best -- by which I mean several ex-girlfriends and a couple of people who hang out over at a certain political blog whom I've never met -- know that I am not, by any stretch of the imagination, a Trekkie.

I mean, okay, I have the pajamas, but that's as far as I go.

That said, I have to admit that when I saw this picture in the current issue of Entertainment Weekly I got chills.

Ladies and gentlemen, the new "original" crew of the Starship Enterprise, courtesy of Lost auteur J. J. Abrams, who's directing the feature film relaunch of the Star Trek franchise due out next summer. 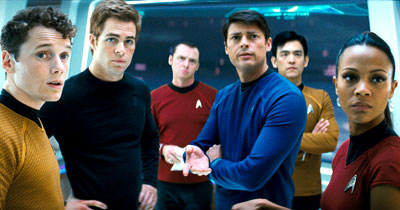 Have I mentioned that the film is a time travel story, that it centers around the original crew's first adventure together, and that Spock's mom and pop are played by Ben Cross and Winona Ryder? And that the great, perennially undervalued Bruce Greenwood is on hand as Christopher Pike, the first, doomed Captain of the Enterprise?

I think what I'm getting at here is, essentially -- wow, in particular Pegg, Urban and Cho, who look like they've been genetically engineered to play their classic characters.

So -- could this be the Star Trek of our dreams? I'm thinking could be, could be...even without pajamas.