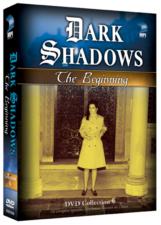 DVD Event of the Week: Is it Universal's new disc of Edward Norton as The Incredible Hulk? Could it be Sony's Icons of Horror: Hammer Films, a two-disc set featuring director Terence Fisher's way cool revisionist Two Faces of Dr. Jekyll? Or is it possible that it's Koch Lorber's Ludwig, Luchino Visconti's 1972 biopic of the mad king of Bavaria in its 237-minute Italian-language version?

All worthy, to be sure, but for my money, it's MPI Home Video's Dark Shadows: The Beginning, a four disc box set featuring 32 complete episodes of the classic 60s TV vampire soap opera.

The brainchild of visionary producer Dan Curtis, Dark Shadows was (for you youngsters) the first daytime Gothic Romance. The saga of Barnabas Collins, a guilt-ridden 175 year old bloodsucker played by instant star Jonathan Frid, it was pretty much the hippest thing on TV in its day (1966-71) and it spawned, predictably two feature films (the first of which -- House of Dark Shadows -- is pretty good, although the followup -- Night of Dark Shadows -- is best forgotten). MPI's new set completes their reissue of the entire series; this last entry features the run of episodes from the Spring of 1967 in which Frid is glimpsed only as a portrait hanging in the Collingwood foyer. Hollywood legend Joan Bennett, however, is still on hand as the series' matriarchal lead, and several other familiar TV faces pop up from time to time, including Mitchell Ryan from Dharma and Greg, John Karlen (Herb from Cagney and Lacey), and of course, original Victoria Winters Alexandra Isles (a figure at the real-life Claus Von Bulow trial later played by Julie Hagerty in Reversal of Fortune). Everything here is beautifully remastered; thoughtful bonuses include a restored version of the episode in which Baranabas makes his arrival (complete with original '67 commercials) and new interviews with two of the original series writers.

Bottom line: A wonderfully evocative period piece, especially if you can remember what was happening in the wider world at the time this stuff was originally broadcast; you can, and probably should, order it here.

BTW, have I mentioned that Tim Burton(!) is directing a big-screen remake starring Johnny Depp(!!) as Barnabas?

Arbitrary disclaimer: I fricking hate -- HATE!!! -- The Rocky Horror Picture Show, so if you nominate it I swear to god I'm gonna take a hostage.

That said, my totally top of my head Top Five is:

5. El Topo (Alejandro Jodorowsky, 1970)
Clint Eastwood's Man With No Name on acid. My favorite scene: The titular gunslinger walks in to a rabbit warren, and his vibe is that so intense all the bunnies suddenly turn up their little paws and die. Please, whatever you do -- don't tell PETA.

4. Glen or Glenda (Edward D. Wood Jr, 1953)
Ed's masterpiece, I think, if only for the scene where the heat pipes in the corner of a dead transvestite's room seem, through the wonders of bad editing, to be talking.

3. Invasion of the Blood Farmers (Ed Adlum, 1972)
A few years ago I was on line for some event or other behind the guy who was the screenwriter for this (an older rock critic who I had never met). When I introduced myself by saying "I've always wanted to shake the hand of the man who wrote Invasion of the Blood Farmers " he looked at me as if I had some sort of loathesome disease and turned away. I was crushed.

2. Rollerball (Norman Jewison, 1975)
Half sex-and-violence exploitation flick, half Marxist critique of Capitalism. The most wonderfully meshugennah major studio film of its day, with the possible exception of John Boorman's Zardoz.

And the number one coolest cult film (seriously -- it's not even a contest so if you nominate anything else I will laugh at you) obviously is...

1. A Boy and His Dog (L.Q. Jones, 1974)
The very young Don Johnson and a telepathic Benji-lookalike that only he can hear (voice of Tim McIntire) prowl the post-nuke-apocalypse American landscape in search of...well, let's not give that away. In any case, as I've said before, the joke here is that the dog is the smart one, and make sure you stick around for perhaps the sickest, funniest ending in film history.