All worthy, to be sure, but for my money it's the Criterion Collection's drop-dead cool version of a stunning French gangster film by Jean-Pierre Melville -- the 1962 Jean-Paul Belmondo vehicle Le Doulos (The Informant).

Melville, who died relatively young in 1973, was one of the great French indie filmmakers, and if you've never encountered his work before, Le Doulos is a terrific introduction. Like most of his films, it's full of homages to noir (there's a classic swinging lightbulb bit) and the work of the American directors he idolized (the ending is a not-so-subtle nod to John Huston's Asphalt Jungle); it's also full of a peculiarly Gallic fatalism that's beautifully embodied here by the granitic Belmondo. Melville also makes terrific use of real life locations (an innovation that made him a hero to and a huge stylistic influence on the New Wave directors, including Jean-Luc Godard, who gave him a small but memorable part in his classic Breathless) and you can see echoes of his work today in filmmakers as diverse as Quentin Tarantino and Jim Jarmusch. Le Doulos itself is classic Melville -- a twisty, violent meditation on friendship and loyalty between anti-heroes with an almost fetishistic fixation on gangster fashion and moments of genuine urban surrealism amidst the mostly naturalistic trappings. In short: a complete knockout.

Criterion's gorgeous new version fetures a high-def restoration with new, improved subtitles, and there are excellent bonuses including the original theatrical trailer, audio commentary by Melville scholar Ginette Vincedeau, a video interview with Volker Schlöndorff, the film's assistant director, and a characteristically insightful booklet essay by my old colleague, critic Glenn Kenny. You can (and most definitely should) order it here now. (Incidentally, Criterion is also releasing another excellent Melville -- the 1966 policier Le Deuxième Souffle -- at the same time; if you have the disposable income for both, go here.)

5. Scarface (Howard Hawks, 1932)
Still incendiery after all these years, and definitely not to be confused with the appalling Brian DePalma remake (BTW: If you ever see that on DVD, don't miss the bonus interview with screenwriter Oliver Stone, in which he carries on at length about how great a film it is without his nose growing even a little).

4. Hard Boiled (John Woo, 1992)
The great Chow Yun-Fat and Tony Leung in what we at Casa Simels have always referred to as Four Shootouts and a Funeral. 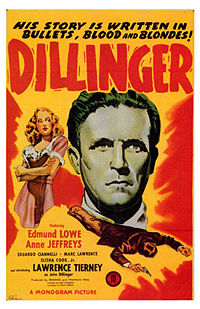 And the all time coolest gangster flick, you gotta be kidding it's not even close so don't give me a hard time, obviously is --