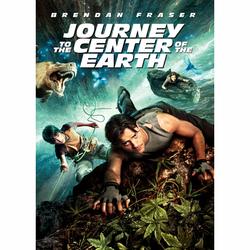 DVD Event of the Week: Is it Disney's gorgeously restored Blu-Ray version of Sleeping Beauty? Is it Paramount's double-disc special edition of Indiana Jones and the Kingdom of the Crystal Skull (you know -- the one where he survives an atomic bomb by hiding in a refrigerator)? Or is it perhaps the new Fox boxed set of The Unit: Season 3?

All worthy, to be sure, and I know last week I said I was going to rave about Kino International's spruced-up version of the silent classic The Last Laugh, but for my money the prize goes to New Line Cinema's new 3D disc of the Brendan Fraser hit Journey to the Center of the Earth.

Trust me, I'm not seriously claiming that this is what might be described as a "good" movie. The people responsible for it clearly made a decision to treat it not as a dramatic film with narrative coherence or reasonably believable characters, but rather as a 90 minute trailer for a theme park as yet unbuilt; difficult as it is to believe, the end result is silly and sloppily written enough to make me nostalgic for Gertude the Duck in the 60s original. Plus, it desperately wants to be an Indiana Jones flick, Brendan Fraser's performance makes his turn in George of the Jungle look like a model of subtlety and understatement, and the kids are totally annoying.

So no, not a "good" movie. That said, however, the widescreen 3D transfer on side two of the disc version is astoundingly vivid and realistic, and if, like me, you're a sucker for the whole three dimensional movie thing, that pretty much trumps any esthetic considerations. Bottom line-wise, if you have a good size monitor and a decent surround system, this is probably the most home theater fun you're likely to have in the forseeable future. C'mon -- a dinosaur hocks a loogie directly at you! What's not to like?

Bonuses include an okay commentary track by Fraser and director Eric Brevig, the de rigeur making-of documentary, and a featurette on the aformentioned dinosaur drool (actually rather amusing). New Line thoughtfully includes four, count 'em four, pairs of 3D glasses; they also include a non-letterboxed 2D version on side one of the disc, but unless you're completely perverse I can't imagine that you'll ever watch it.

Most Interesting, Audacious, or Just Wonderfully Crass Gimmick Film Ever!!!

And by "gimmick film" I mean one that nobody would have bothered to go see in a theater if it weren't for whatever novelty it was being marketed with.

5. Scent of Mystery (Jack Cardiff, 1960)
Smell-o-Vision, obviously; various odorific gases were released into the theater when appropriate to the plot (the critics' almost unanimous vedict: "It stinks."). John Waters later ripped it off paid affectionate homage to it with the snatch-and-sniff Odorama cards distributed to the audience of his 1982 Polyester.

4. The Mask (Julian Roffman, 1961)
The titular Mask is haunted by a jungle demon and (in a metaphor for drug addiction) takes possession of whoever puts it on, driving them to murder. Whenever a character in the film was moved to don the thing, the audience was admonished to put on Mask-resembling 3D glasses, the better to enjoy some spooky montage scenes directed by the great Slavko Vorkapich (if not, perhaps, to murder the person in the next seat). No DVD version yet, alas.

3. The Tingler (William Castle, 1959)
Scientist Vincent Price discovers that fear is actually caused by a small crayfish that lives at the bottom of the human spine and gets bigger when the mind responds to threats of danger. At the film's climax, he releases one of these creatures into a movie theater, at which point (theoretically) seats in the movie theater you were sitting in were wired to shock you. I can't speak for the rest of the country, but at the Oritani Theater in Hackensack New Jersey -- no such luck. Castle called the seat gimmick "Percepto," by the way. 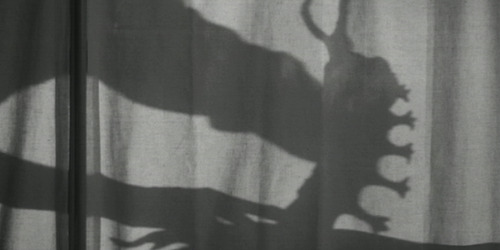 2. The List of Adrian Messenger (John Huston, 1963)
A bunch of then big Hollywood actors were advertised to appear in the film heavily disguised in latex makeup, among them Tony Curtis, Kirk Douglas, Burt Lancaster, Frank Sinatra, and Robert Mitchum. After the lame mystery plot is wrapped up, they all remove their masks and grin. Anticlimactic doesn't begin to describe it.

And the coolest gimmick film, it's not even close so don't give me a hard time or swear to god I'll smack you, is obviously --

1. Buck Rogers in the 25th Century (Daniel Haller, 1979)
A crappy TV pilot expanded to the length of a feature film -- and they expected people to pay their hard earned shekels to see it? Sure! Post Star Wars, just tell folks it's in Sensurround©, crank up the early sub-woofer bass, and you have a license to print money. I should know -- I actually paid to see this turkey.

Tags: Sleeping Beauty, Kingdom of the Crystal Skull, Journey to the Center of the Earth, George of the Jungle, Scent of Mystery, The Mask, The Tingler, The List of Adrian Messenger, Buck Rogers in the 25th Century
Print