Christmas Comes But Once A Year (A Recurring Series)

Okay, the economy is, in Raymond Chandler's phrase, trying to crawl under a duck [see below], but the fact is we're all going to have to buy presents this holiday season no matter what. So in that spirit, allow me a recommendation -- if you've got a little disposable income and some boomer friends on your Christmas list, you really ought to check out the latest installment of Disney Video Treasures -- limited edition sets of interesting, heretofore unavailable stuff from the Disney vaults, complete with numbered certificates of authenticity and some other bells and whistles. Of course, the two-disc DVDs inside the collector's tins are what you're really paying your $32.99 a pop for.

We start with The Mickey Mouse Club Presents Annette, featuring vintage material from the show's third and final season (1957-58). And by vintage we mean a 20 episode fish out of water sitcom starring the disturbingly pneumatic young Annette Funicello as an innocent country girl who moves to the suburbs. Predictable hilarity ensues, but as a period peice it's never less than fascinating. Bonuses include a documentary tribute to Annette's career and ouevre, plus intros by redoubtable film historian Leonard Maltin (full disclosure: I went to high school with Lenny, and used to watch 16mm prints of old Roger Corman movies in his basement).

Next up is The Chronological Donald Volume Four, featuring, obviously, the irascible and inexplicably pantsless Donald Duck. This new set anthologizes the complete run of Donald's cartoon vehicles from 1951-61; they may lack the anarchic edge of the competing Warner Bros. Looney Tunes, but almost all of them are little masterpieces of slapstick timing and comic invention, gorgeously animated. The real selling point, of course, is that the Cinemascope entries are presented here in widescreen for the first time on disc. Way interesting bonuses include a storyboard for an unproduced Donald feature, a retrospective of the fowl's comic book career, and more intros by the aforementioned Leonard Maltin. 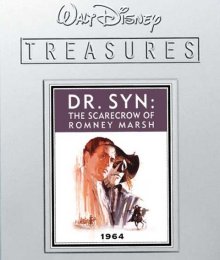 If you only have the cash to spring for one of these sets, however, I would recommend you go with the 1964 Dr. Syn: The Scarecrow of Romney Marsh. This is an absolutely smashing live action period costume adventure starring a pre-Secret Agent Patrick McGoohan as the titular scarecrow, a masked avenger in the Batman/Zorro mold who is a respected minister by day and the daring leader of a Robin Hood-ish smuggling gang by night. It's all done with tremendous style by a terrific Brit cast, and you have the option of watching it in its original form, as three hourlong episodes of Disney's Wondeful World of Color TV show, or in its re-edited theatrical feature film version; both, I am happy to add, are making their widescreen debuts. Bonuses here include Uncle Walt's original TV intros (also in widescreen), an excellent making-of documentary, and yet more intros by the astoundingly indefatigable Maltin. Sheesh, dude, I got tired just watching you.