Fasten Your Seat Belts, It's Going to Be a Bumpy Night!

Look, let's face it -- there are reasons you pay the big bucks to live in New York City. Case in point: The all-star staged reading of Joseph Mankiewicz's classic 1950 film All About Eve taking place tonight at the Eugene O'Neill Theater as a benefit for The Actor's Fund.

Eve, of course, is -- for those of you who've been living on Mars since WWII -- the classic backstage drama that's rightly considered one of the most entertaining and witty films of all time, with a script that's about as close to genuinely Shavian as anything ever out of Hollywood. It was nominated for 14 Academy Awards (a feat matched only by 1997's Titanic) and won six, including Best Picture. It was selected for preservation in the United States National Film Registry, and appeared at #16 on AFI's list of the 100 best American films. 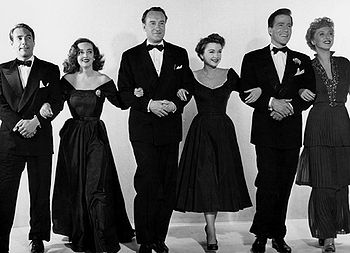 That's most of the original cast -- from left to right, Gary Merrill as Bill Simpson, Bette Davis as Margo Channing (perhaps the performance of her career), George Sanders as Addison DeWitt, Anne Baxter as the titular Eve Harrington, Hugh Marlowe as Lloyd Richards, and Celeste Holm as Karen Richards. Not shown: the then mostly unknown Marilyn Monroe as Miss Caswell, Gregory Ratoff as Max Fabian, and Thelma Ritter as Birdie.

Plus Jennifer Tilly(!) in the Marilyn Monroe role, Joel Grey(!!) as Max, and Angela Lansbury(!!!) as the wisecracking and very Bronx-ish Birdie, who gets to deliver pretty much my all-time favorite line in movie history: "What a story! Everything but the bloodhounds snappin' at her rear end."

-- and the adorably gamine Baxter in the play within the movie.

And in one of film history's more interesting ironies, we should also note that Lansbury, who twelve years later (in The Manchurian Candidate) played Laurence Harvey's mother despite being only three years his senior, was the original choice for the Marilyn Monroe/Jennifer Tilly showgirl character.

The reading's being directed by Emmy-winning film and TV vet John Erman; there's no word on whether the thing is being recorded for broadcast at some point down the line, but it would frankly be a crime against nature if it wasn't, so we'll keep you posted.

Coming tomorrow: Our backstage look at the upcoming all-star benefit version of Long Day's Journey Into Night On Ice!