If you were around yesterday for our discussion of crappy vampire flicks -- inspired, of course, by the runaway success of the Abstinence Only Twilight (in theaters now) -- you might have noticed that constant reader Anonymous put in his or her two cents for the 1970 Vampyros Lesbos. I hadn't thought about that little number for ages, but the mention produced an all but Proustian reaction in me -- not because of the flick itself (which I must admit I've never seen) but because its soundtrack album has a cherished place on the CD shelf here at Casa Simels. 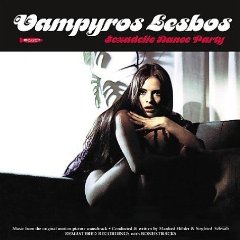 The film itself sucks, of course, and I can say that despite never having seen it because it's the work of irrepressible shlock auteur Jess (a/k/a Jesus) Franco, a/k/a The World's Most Awful Director. A filmmaker of frightening fecundity, Franco has directed more (bad) movies than most people have had hot meals; probably the best of his ouevre is the 1969 Castle of Fu Manchu, with a slumming Christopher Lee, and that's only watchable in the parody version from the folks at Mystery Science Theater 3000. The rest of his stuff (mostly horror and exploitation fare whose subtext is invariably, in my 8th grade Hygiene teacher's immortal phrase, X-E-S spelled backwards) is, well, just appalling. Needless to say, this has not prevented him from acquiring a cult following, like his contemporaries Fred Olen Ray and Albert Pyun, but basically if you're a serious fan of Franco there's no hope for you.

Oh hell, here's the Vampyros Lesbos trailer; watch it if you must, but don't say I didn't warn you.

But we were talking about that soundtrack album, which as you can see from the link above is still available. A review copy crossed my desk at The Magazine Formerly Known As Stereo Review back in 1996; the cover immediately grabbed me (for obvious reasons) and I was also charmed by the X-rated porno comic book the producers graciously included in the accompanying press kit (that may or not be part of the CD package if you decide to buy the thing, so caveat as they say emptor). In any case, the music's the thing here, full of fuzz-tone guitars, twangy sitars, and vintage 70s wacka-wacka-jawacka; in short, precisely the sort of period Hef's Jacuzzi kitsch that hardcore hepsters were grooving on in the mid-90s. The babe on the cover, incidentally, is Vampyros Lesbos star and frequent Franco muse Soldedad Miranda, who died in a 1971 car crash and has since (like the Great Man himself) gone on to cult stardom.