DVD Event of the Week: Is it Fred Claus, the surprisingly funny holiday comedy with Vince Vaughn and Paul Giamatti from Warner Home Video? Could we be talking about Sony's Hancock, the anti-social superhero comedy starring Will Smith? Or have the Fates smiled upon Koch Vision's new edition of Martin Ritt's saintly sharecropper's essay Sounder?

All worthy, to be sure, for my money it's got to be the Criterion Collection's superb restored high-def transfer of Samuel Fuller's astounding 1981 parable of American racism White Dog. 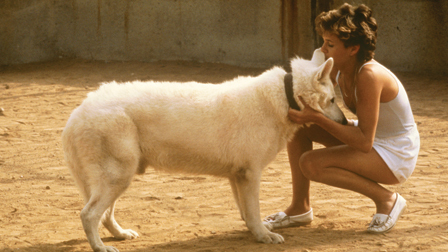 A brilliant piece of neo-realist pulp, the film stars Kristy McNichol (excellent despite a succession of truly heinous early 80s outfits) as a struggling actress who accidentally runs down a stray German shepherd in the Hollywood Hills. She adopts the dog and then, in a series of horrifying incidents Fuller shoots from the animal's point of view, learns that he's actually been trained to attack black people. Appalled, she tries to cure the dog by taking it to a maverick trainer (Paul Winfield) who happens to be black; the rest of the film pushes the metaphor about as far as it can be pushed, and eventually it ends, rather despairingly, with a beautifully choreographed sequence that's an homage to the final shootout in The Good, the Bad, and the Ugly.

If you haven't seen this, it's not particularly a surprise; Paramount essentially declined to release it when it was made (effectively ending Fuller's career in Hollywood) and apart from a limited art house run in the early 90s it's been more of a rumor than a movie. The reasons for the shelving of the film are complicated -- Fuller was convinced that it was the fault of the Reagan administration (in his immortal phrase "It was 1982...and the Republicans had the country's morality by the balls") and while that may be an oversimplification, there's no doubt that the time was not quite right for a film whose high concept was, in Village Voice critic J. Hoberman's apt formulation, Rin Tin Tin Joins the Klan. In any case, seen today it seems an unarguable masterpiece.

Here's a new trailer to give you an idea of just how visceral the whole thing is.

Criterion's new transfer (the film's first appearance on DVD) is about as flawless as these things get. Producer Jon Davison (who can be seen in an interesting bonus interview) supervised a painstaking restoration from a 35mm interpositive print, and the results are stunning; you can practically feel the heat rising off the L.A. asphalt. Other bonuses include interviews with Fuller's widow and dog trainer Karl Lewis Miller. There's also an interesting booklet with a superb appreciation of the film by the aforementioned Hoberman and a rather lesser one by usually fatuous New York Press critic Armond White. Best of all, however, is a 1982 piece (originally written for an obscure film rag) in which Fuller interviews(!) the canine star of the film.

SF: Are you familiar with Alexander Pope's "On the Collar of a Dog"?

DOG: Yes, something about a dog at Kew.

SF: On the collar of a lost dog were the words: "I am his Highness' dog at Kew; Pray tell me sir, whose dog are you?"

DOG: Hits the nail on the head, doesn't it?

DOG: It would hit harder if bigots wore a dog collar reading: "I'm a sonofabitch racist, it's true; Pray to God and become one too."

Bottom line: This is essential viewing; you can -- and most definitely should -- order it here.

Okay, that said, since things will likely be quiet around here until Monday, and not to mention the excitement aroused of late by this adorable puppy-cam, here's a hopefully amusing little project for us all: 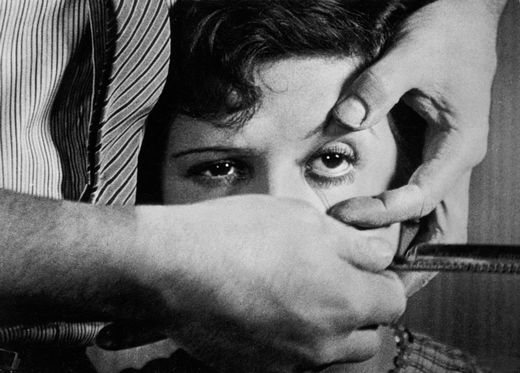 When a body meets a body, coming through the eye!

4. The Hound of the Baskervilles (Terence Fisher, 1959)
Peter Cushing as Sherlock Holmes, with a dog from hell snapping at his rear end, in what is on balance still the best version of the often filmed Conan Doyle novel.

Rex Reed famously said of Benjii that "that pooch could play Hamlet!" But could he slam dunk? I think not!

And the most memorable Cinema Canine ever, there isn't even a plausible argument otherwise so just don't give me any crap on this one, obviously is

1. Cujo (Lewis Teague,1983)
As a friend of mine famously put it at the time -- Dee Wallace Stone and a cute kid are being menaced by a really big dog and I'm supposed to care?