The Blood is the Life, Mr. Cullen 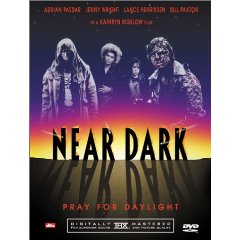 Back in 2002, my personal hero Triumph the Insult Comic Dog, talking to rock star Jon Bon Jovi about his forthcoming star turn in a crappy John Carpenter vampires-amongst-us flick, famously said "At last! A role that REQUIRES you to suck!"

I bring this up because I happen to know that the opening on Friday (and as eagerly awaited as if it was The Beatles arriving at JFK in 1964) vampires-amongst-us teen flick Twilight is in fact going to suck.

Seriously, I know this in the same deeply certain (and as it turned out objectively correct) way I also knew that The Lost Boys was going to suck. Not to mention Interview With the Vampire (oh yeah -- Tom Cruise playing Byronic. Brilliant.)

How come? Because the definitive modern vampires-amongst-us movies have already been made. Exhibit A, in this regard, is Abel Ferrara's astounding and despairing 1995 The Addiction, a metaphor abundant black-and-white horror in which the Anthropology department at NYU turns out to be riddled with bloodsuckers (scroll down for the trailer).

More to the point, however, is Kathryn Bigelow's 1987 masterpiece Near Dark, which is as rich and strange as these things get or are likely to. 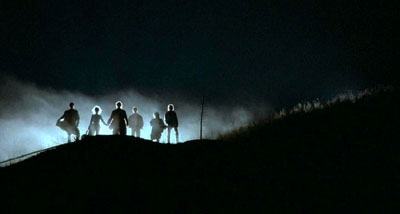 If you haven't seen it, it's about a bunch of mysterious drifters (in the Western movie sense) who are actually 200 year old immortal (if somewhat scruffy) vampires. They drive around the malls and blue collar towns of the mid-West in a broken down panel truck, from time to time stopping only to feast on the patrons of some Patrick Swayze-ish roadhouse before heading on to the next town in a neverending quest for the reddest of necks. It's all wonderfully dark and stylish and (for my money) a metaphor of sorts for the bleak lunar landscape of America during the Reagan Era crack epidemic. I's also got some now familiar faces in its cast -- Adrian Pasdar (currently doing time on Heroes), the wonderful Bill Paxton, and of course the preternaturally sepulchural Lance Henriksen as the vampire clan patriarch. Here's the trailer, for a taste of the deliciously subversive feel the amazing Bigelow brings to the story.

Fortunately, there's a gorgeously transferred DVD of Near Dark currently in print; you can -- and most DEFINITELY should -- order it here.

Meanwhile, have I mentioned that Twilight is definitely going to suck?

Tags: Twilight, The Lost Boys, Interview With the Vampire, The Addiction, Near Dark
Print