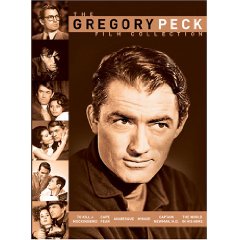 DVD Event of the Week: Is it Warner Home Video's double disc set of Steve Carell in Get Smart? Could it be Paramount's Brobdingnagian 27 disc(!) set of The Wild Wild West: The Complete Series? Or shall we simply admit it's Shout Factory's four disc Mystery Science Theater 3000: 20th Anniversary Edition and get on with our lives?

All worthy, to be sure, and I am DEFINITELY going to rave about the MST3k box next week, but for my money, it's Universal's The Gregory Peck Film Collection, a six disc set featuring several of Peck's best, but in particular (from 1965) the DVD debut of the amazingly Hitchcockian puzzler Mirage.

Directed by the talented but morally compromised Blacklist victim Edward Dmytryk, from a script by Peter Stone (who had just done the equally fabulous Cary Grant/Audrey Hepburn thriller Charade), Mirage features Peck as David Stillwell, a cost accountant (or so he thinks) who emerges from the New York City blackout of '65 to find out that everything he remembers doing for the prior two years has not, in fact, occurred. It's not quite amnesia (and everyone assures him that real traumatic amnesia only lasts for a day or two), but it's damned unsettling, especially when the office he thinks he works at turns out to be a cul-de-sac, mysterious women he doesn't know from Adam claim to be his lover, and weird homeless people start trying to kidnap him at gunpoint. There's lots of spooky visual stuff -- corridors that go nowhere, basements that don't exist, weird Dali-esque fragments of memory -- and the plotting is ingenious, including a nifty Cold War political subtext that turns up as the basis for a powerful surprise ending. There's a great supporting cast, too, including Kevin McCarthy, Jack Weston (against type) as a sinister gunsel, and (best of all) Walter Matthau as a schlumpfy but surprisingly on the ball low-rent private eye.

Here's the opening ten minutes, for a real flavor of how surreal and disorienting the thing is.

Apart from Mirage, Universal's new Peck set also includes the original Cape Fear (with a terrifying Robert Mitchum), plus three more DVD debuts -- Stanley Donen's uneven Arabesque (with a staggeringly sexy Sophia Loren), plus Captain Newman M.D., The World in His Arms -- and perhaps Peck's signature film, To Kill A Mockingbird. The transfers are excellent across the board; you can (and most definitely should) order the box here posthaste.

Most Memorable Yet Oddly Overlooked Thriller!!!

5. Secret Agent (Alfred Hitchcock, 1936)
John Gielgud, Peter Lorre, Madeleine Carroll and Robert Young are spies triple-crossing each other in one of the Master's most entertaining cat and mouse games.

4. The Mask of Dimitrios(Jean Negulesco, 1944)
Mystery novelist Peter Lorre goes to Turkey and becomes obsessed with the life of a shadowy criminal mastermind whose body washes up on an Istanbul beach. Nail-biting suspense from a novel by Eric Ambler; Lorre, as a good guy for a change, is riveting.

3. Whispering Ghosts (Albert Werker, 1942)
A pre-TV stardom Milton Berle stars as a radio celeb solving a years-earlier murder in an all but flawless comedy-mystery with horror trappings. They really don't make them like this anymore.

2. Young and Innocent (Alfred Hitchcock, 1937)
The Master again, with an innocent-man-on-the-run sort of warm-up to the better known North By Northwest. Includes the most astounding moving camera reveal in film history.

And the all time most memorable overlooked thriller, you gotta be kidding it's not even close so don't give me a hard time, obviously, is --

1. A Study in Terror (James Hill,1965)
Probably the best Sherlock Holmes pastiche ever filmed, with John Neville, as the great detective, tracking down a government conspiracy to cover up the identity of Jack the Ripper. Featuring a very young Judy Dench as a major babe.