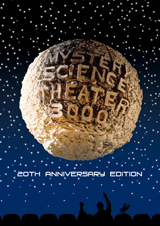 DVD Event of the Week: Is it The Little Rascals: The Complete Collection, from the aptly named Genius Entertainment? Might it be Disney's Dr Syn: The Scarecrow of Romney Marsh, a fabulous masked hero swashbuckler starring the pre-Secret Agent Patrick McGoohan? Or should we talking about The Sopranos: The Complete Series, a humongous 400 hundred dollar/33 disc box from HBO Video?

All worthy, to be sure, and with any luck I'll be raving about that Dr. Syn set soon (Patrick McGoohan rules, okay?) but for my money it's got to be Shout Factory's four disc Mystery Science Theater 3000: 20th Anniversary Edition.

How do I love this set? Let me count the ways. For starters, the episodes here are primo -- Joel, Mike and the Bots skewering the likes of Future War, First Spaceship on Venus, the wonderfully awful Werewolf (Kevin Murphy, aka Tom Servo, rightly calls the film "a gift from God"), and Laserblast (the last show before it departed Comedy Central for the Sci-Fi Channel, with the brilliant 2001: A Space Odyssey parody ending). Extras? On Future War, you get every single version of the show's theme song, plus a hilarious 2008 panel discussion with all the stars and writers from the show's ten year run hosted by Ratatouille star Patton Oswalt; the other discs have parts 1-3 of an excellent new in depth interview with all the show's principals.

Of course, the real reason the 20th Anniversary Edition is so great is the show itself. Starting from a deceptively simple premise -- a bunch of guys talking back to really bad movies on their TV -- Mystery Science Theater 3000 went on to become, between 1988 and 1998, the most brilliant, post-modern skewering of all aspects of contemporary culture, both high and low, ever aired. It was endlessly inventive, passionately funny and occasionally even touching, with characters that seemed a lot more real and human than those on a lot of higher profile 90s prime-time shows, comedy or drama, despite the fact that at least three of them were robots (well, puppets of robots, but you get the idea). And have I mentioned that it was consistently laugh out loud hilarious?

In any case, here's an excerpt that should give you an idea -- Mike, Servo and Crow improvising a new song for the end credits of Werewolf.

Shout Factory's transfers look and sound smashing; the bottom line is that you can (and most definitely should) order the set here.

Okay, that said, and since things will likely be quiet around here for a couple of days, here's a hopefully amusing little project for us all:

Best Ever Parody of a Specific Film or Film Genre !!!

5. Top Secret !( David Zucker, Jim Abrahams, and Jerry Zucker, 1984)
A Cold War spy thriller crossed with an Elvis musical. I firmly believe this is one of the funniest films of all time; certainly, it's the best thing the guys behind Airplane ever did. Come to think of it, it may be the best thing Val Kilmer ever did. Well, at least till he got the gig as the car's voice on Knight Rider. Boy -- there's a career move.

4. The Great Piggy Bank Robbery (Robert Clampett, 1946)
Daffy Duck IS Duck Twacy, Private Eye, in a priceless (and surreal) film noir spoof. Dick Tracy creator Chester Gould was going to sue, but once he saw it he was so impressed he changed his mind.

2. Singing in the Rain (Gene Kelly and Stanley Donen, 1952)
Between the iconic musical numbers, the silent cinema gets an affectionate skewering here that wouldn't be surprassed until Mel Brooks.

And the all time most memorable film parody is, you gotta be kidding it's not even close so don't give me a hard time, obviously, is --

What -- they weren't kidding?