Okay, this is beginning to feel like shooting ducks in a barrel, but have I mentioned that history's first Abstinence Only Vampire Romance -- Twilight, in theaters now! -- really sucks?

Yeah, yeah, I know it's "a full-blown pop culture phenomenon" (Gina McIntyre, Los Angeles Times), and that unless I want to suffer serious status loss I have to "see it over and over again" (Earl Dittman, Wireless Magazines). Of course, I only know all that from reading the Twilight ad in today's New York Times over breakfast, but never mind. In any case, though, Twilight still sucks; about the best you can say for it (thank you, David Edelstein) is that it's a Tiger Beat version of Twin Peaks, with all that entails, and god help us when the three or four sequels currently in the pipeline finally arrive.

That said, I'd be remiss if I didn't now sing the praises of an unjustly obscure vampire movie that's simultaneously cheesier (okay, there's no High School prom sequence, but still) and a lot more interesting than Twilight. I refer, of course, to the 1959 Universal classic Curse of the Undead, a/k/a history's first Cowboys Versus Vampires Romance. 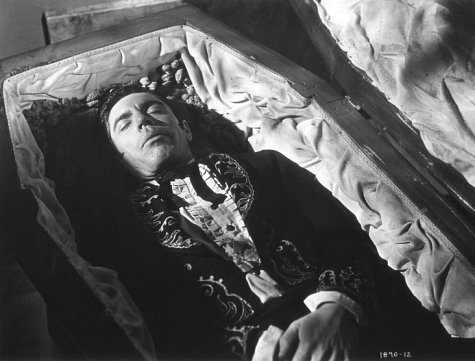 Young (and no doubt innocent) women in a small Western town are dying one by one of an unknown malady involving massive blood loss. The Carter family's ranch is being terrorized by ruthless land baron Buffer (Bruce Gordon). And a mysterious black-clad gunfighter (Michael Pate) with an aversion to sunlight has just arrived in town. Turns out he's the vampire scion of old Spanish nobility who used to own the land, and it's up to the local preacher (Eric Fleming) to keep him from wreaking unholy revenge on the descendents of those who wronged him a century before. There's lots of talk about the nature of evil, a nice barroom brawl, an obligatory spooky crypt scene, and the whole thing eventually climaxes with a variation on the classic western shootout -- the preacher guns down the man in black with a silver bullet to the heart and he crumbles to dust in front of God and everybody.

The casting here is a lot of the fun, including veteran heavy Gordon (Frank Nitti on The Untouchables), John Hoyt (the ship's doctor on the original Star Trek pilot) and Edward Binns (who if there had been any justice would have played Judge Sirica in a movie about Watergate). Handsome stiff (!) Fleming, of course, was a familiar TV presence from countless seasons of Rawhide opposite the young Clint Eastwood. But the real reason to see Curse of the Undead , apart from it's nifty low-budget Gothic ambience and originality, is -- and this is hardly a surprise -- the late Michael Pate as the tragic bloodsucker. 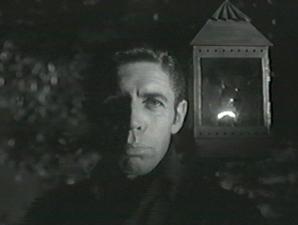 A brooding Australian actor with lots of interesting credits -- in 1979 he wrote and directed the highly acclaimed Tim starring Piper Laurie and the young Mel Gibson -- Pate strikes just the right Byronic note throughout his performance, with a mix of sex appeal and menace that transcends the film's B-movie backlot origins. Alas, it doesn't seem to be on DVD at the moment, but you can order a very good quality VHS version here.

Oh, and by the way -- Twilight still really sucks.