Christmas Comes But Once a Year (The Final Chapter) 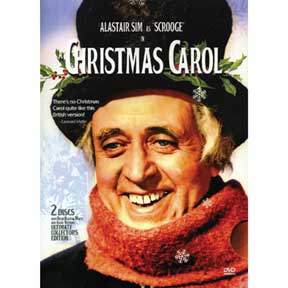 And speaking as we were yesterday of the seemingly innumerable films based on Charles Dickens' holiday evergreen A Christmas Carol, we are pleased to report that the best of them is now available on a truly spectacular restored double disc DVD. We refer, of course, to the 1951 British-made version starring Alastair Sim, which is has been spruced up to a fare-the-well (from the original film elements) by the good folks at VCI Entertainment.

The Sim version, a/k/a Scrooge, is extremely well mounted, and the black-and-white cinematography looks like a Dore engraving in this new restoration. The film also benefits from a screenplay (by Wizard of Oz co-writer Noel Langley) that gets just the right balance between spooky and sentimental, and a rather amazing supporting cast, including Avengers star Patrick MacNee as the young Jacob Marley, Hammer rep comparny vets Miles Malleson and Francis De Wolff, and the spectacularly epicene Ernest Thesiger (the other mad doctor in Bride of Frankenstein). But the real reason this is the definitive Carol is Sim himself; his Scooge is probably the most tightly wound you've ever seen, and as a result his post-Ghost conversion is quite screamingly funny -- you've never seen anybody take such eccentric delight in feeling good about himself. VCI's package has the original B&W film, restored, in both full screen and 16X9 enhanced versions; disc two has a more than serviceable colorized version, plus a good looking print of the lesser known but historically interesting 1935 adaptation starring Seymour Hicks. There's also lots of bonus features, including interviews with one of the films exec producers and the original trailer; Patrick MacNee himself provides a video intro to the colorized version. In short, this is one to get on every level -- you can, and should, order it here.

Incidentally, there's a great story about the aforementioned Ernest Thesiger. A genuine iron butterfly, if you catch my meaning, Thesiger enlisted in the British army at the outbreak of World War I, allegedly hoping to be assigned to a Scottish regiment because he wanted to wear a kilt, but he was wounded in the trenches in France and sent home. Years later, somebody -- one of the Mitford girls, I think -- asked him what it was like at the front, and he replied "Oh my dear...all that noise, all those people."