Great Lost B-Pictures of the Fifties (An Occasional Series) 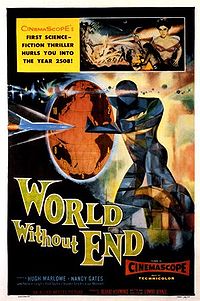 Somedays one has to give thanks to whatever Film Gods there may be, just because. Today, however, I give thanks to them because -- with apparantly no fanfare whatsoever -- Warner Home Video has just given us the DVD debut of one of the most interesting sci-flicks of the Eisenhower era (and certainly the one that most made an impression on me as a child).

I refer, of course, to the 1956 post-nuke apocalypse thriller/cheescake fest World Without End, written and directed by Three Stooges auteur Edward Bernds (which come to think of it has not previously been on home video at all).

Four Christmases -- Intermittently funny, and it's nice to see some old familiar faces like Mary Steenburgen and Carol Kane again. Too bad they've had so much work done they look like Katherine Helmond in Brazil, of course. On the other hand, Reese Witherspoon looks just like my old college sweetie, so it's not a total loss.

In any case, I first saw WWE on the old Million Dollar Movie in the early 60s; it immediately impressed me as one of the smartest and coolest art-directed sci-flicks I'd ever seen at that tender age. Of course, due to the exigencies of the 12 inch black and white TV set in my parents living room at the time, I had no idea that it was actually in wide-screen and Technicolor, and that it in fact it had been sold as the the first Cinemascope sci-fi flick ever (it beat the bigger budgeted and today more famous Forbidden Planet into theaters by several months).

In any case, herewith the plot, which is an interesting mash-up of elements from The Time Machine and Planet of the Apes.

In the not too distant future (1958), four plucky astronauts (including Mel Gibson of his day Rod Taylor, before his star turn in the aforementioned The Time Machine and still sporting the accent of his Australian homeland) are on the first photographic mission to Mars. On the way home, however, they encounter the obligatory problem with the space/time continuum, and crash land on an earth-like planet where they encounter desolation, savage cyclopean mutant cave people, and an underground civilization populated by wimpy men and drop-dead gorgeous women in skimpy costumes designed by celebrated Playboy artist Alberto Vargas. Turns out they're actually on Earth five hundred years after a nuclear war has left the planet a radioactive ruin. Eventually, after much political intrigue and forbidden romance, the brave adventurers defeat the tribe of savage mutants and lead the rest of humanity up to the surface to begin the arduous task of rebuilding civilization.

Some cornball period dialogue notwithstanding, this is mostly a serious, well-thought out cautionary tale with pretty good production values (the hallway leading into the underground city looks almost as impressive as the corridor leading into the lair of the Wizard in Oz). Of course, even my undiscriminating 15-year-old self was unconvinced when the astronauts were menaced by this rubber spider -- 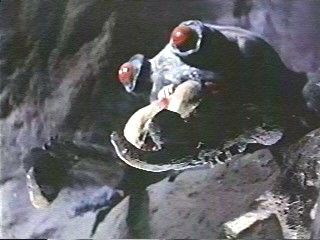 -- although my disappointment was somewhat mitigated by the presence, a few reels later, of paralytically sexy co-star Nancy Gates in one of those Vargas outfits. 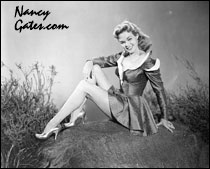 Ms. Gates' gams notwithstanding, the film is also noteworthy for an eerie orchestral score by should-be-better-known composer Leith Stevens and uncredited dialogue direction by a very young Sam Peckinpah.

I should also note that WWE sports what's probably still my favorite lines from all of 50s sci-fi. In the film's penultimate scene, as Rod Taylor is about to fight hand to hand against Naga, the huge savage mutant patriarch, one of his astronaut colleague's yells at him "He's got one eye, Herb -- no depth perception!"

In any case, Warner's new DVD apparently offers an absolutely flawless widescreen transfer, and comes backed with another worthy but obscure piece of 1956 sci-fi, Satellite in the Sky, featuring the pneumatic Lois Maxwell (Miss Moneypenny in the later James Bond films); you can and should order it here.

Tags: World Without End, Four Christmases, Australia, The Time Machine, Planet of the Apes, Satellite in the Sky
Print