Words fail me on this one. From today's New York Times Arts and Leisure section:

A group of film producers is preparing a biopic about the early life of Jerry Garcia, the musician and counterculture symbol, before he joined the band that would become the Grateful Dead, The Hollywood Reporter said. The producers Albert Berger and Ron Yerxa (Election, Little Miss Sunshine) and Eric Eisner ( Hamlet 2) have acquired the movie rights to Dark Star, an oral history of Garcia’s life by Robert Greenfield. Also, Variety reported that HBO would be developing a show based on the rock ’n’ roll childhood of Anthony Kiedis, the lead singer of the Red Hot Chili Peppers. The series is tentatively titled Scar Tissue, taken from Mr. Kiedis’s 2004 memoir.

As far as the Garcia movie goes, I've never been a Deadhead, although I kind of would like to see it, if only because it might drive fat Oxycontin addict distinguished pundit Rush Limbaugh, who famously referred to Jerry as "just another dead doper," to an on-air stroke. My guess, however, is that Hollywood will probably tart the story up a little bit; given Garcia's ethnic background, I'm figuring something like that Frankie Muniz vehicle Agent Cody Banks. 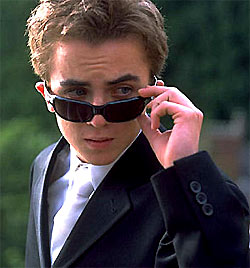 With young Jerry as a globetrotting superspy who also smokes a lot of weed. Could be a hot one!

As for the Kiedis show, all I can say is that if I ever hear that fricking "Under the Bridge" song again I swear to god I'm gonna take a hostage.

Coming tomorrow: My spec script for Young Con Edison: Part One (Invention of the Utility Bill).