Tales From the Rosy-Fingered Dawn

And speaking as we were yesterday of the 1947 Bela Lugosi vehicle Scared to Death, which aired on Turner Classic Movies earlier this morning: Well, I roused myself from my pastoral torpor to check it out (the things I do for you guys) and I have to say -- this is one wacky flick. 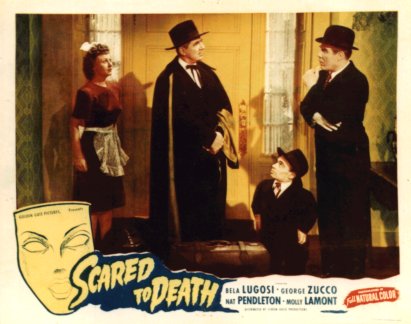 We open with a woman on a mortuary slab who informs us, in echoed voiceover, that she died of fright. How? Turns out she was married to the no-goodnik son of a no-goodnik doctor who ran a private sanitorium where she was being treated for reasons not altogether clear, although the fact that a European stage magician with a sinister dwarf assistant hung around the place suggests that something, as they say, was probably up. Eventually we learn that she was the former wife and partner of René, a Paris dancer who had been shot by the Nazis during the War. No-goodnik son, it turns out, had concoted a complex scheme to trick her into confessing that she was a collaborator (something about René's death mask -- don't ask) but it ultimately backfired and literally scared our narrator to death. Or I think that's what happened -- it was early and I was half asleep when I watched it. In any case -- The End.

Filmed, as you can see from the trailer, in astoundingly unnatural Natural Color (one of only three color movies featuring Lugosi), STD anticipates the corpse narrating the story of his own death gimmick in Billy Wilder's Sunset Boulevard by a good three years. Director Christy Cabanne, one of the most prolific (if not perhaps the most inspired) filmmakers in cinema history, does more or less yeoman work here with a pretty good cast, including reliable villain George Zucco and bumbling straight man Nat Pendleton, but the overall effect is oddly disorienting, like you're watching the movie on a weird cocktail of tranquilizers. Incidentally, Douglas Fowley, who has the male ingenue role, was the son-in-law of operetta composer Rudolf Friml (of The Vagabond King fame) and the father of Kim Fowley, the Hollywood scenester who discovered/created the all-girl 70s punk/metal band The Runaways, thus giving the world Joan Jett.

If any of this has interested you -- and if it didn't, why the hell did I get up early this morning? -- you can get a decent DVD of the thing here.