The Present Day Hepster Refuses to Die (An Occasional Series) 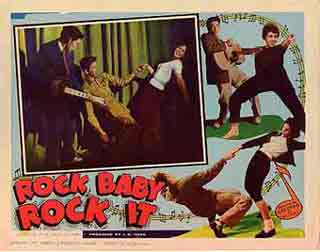 Looking for a Christmas gift for that hard to please music geek (sub genus: rock fan) on your shopping list? Hey -- who isn't? In any case, allow to me suggest something they probably have never heard of that's guaranteed to make them, as the kids say, plotz -- specifically, the astoundingly obscure but utterly mind blowing 1957 film Rock, Baby, Rock It.

On the most obvious level, RBRI is one of those classic black-and-white low-budget flicks made as a quick cash-in on the youth-driven rock craze of the late 50s, although unlike some of the better known examples of the genre, it was filmed almost entirely in a Dallas, Texas hotel lobby. The predictable plot is the usual The Kids Just Want to Groove on the Music But the Man (or the Mob or Whatever) Won't Let Them, but what really sets it apart is from the pack is a) the verité feel of the thing, which is to say that most of the aforementioned Kids are played by genuine Dallas teens in their street clothes, and b) the music, which consists of utterly blistering lip-sync jobs by a succession of regional rock acts, black and white (in the ecumenical spirit of the day), who will be unknown to all but the hardiest of collectors or rockabilly specialists, but who to a person bring down the roof of the fake nightclub at the heart of the film's action. I can't begin to single out the most memorable performances here, but let's just say that the harmonies and stage presence of the Everly Brother-ish Belew Twins approach the otherworldly, that guitar-wielding Johnny Carroll is Carl Perkins with charisma, and that Kay Wheeler, the president of the National Elvis Presley fan club, does a little dance number that thoroughly justifies her billing as the Queen of Rock 'n' Roll.

The great Marshall Crenshaw, a man who knows, said it best in his 1994
Hollywood Rock, still the definitive study of rock on celluloid: This film is "required viewing for every American."

Here's the DVD reissue trailer to give you an idea of what an astonishing time capsule it is.

RBRI was for years the most hard-to-find and sought after rock film ever; Rhino put out a nice tape version of it in the 90s, but the more recent DVD version (from the charmingly monikered Arcanum Entertainment), has a fascinating audio commentary by the now protracted in the molar Wheeler and is a significant technical improvement. You can -- and I mean definitely should -- order it here.