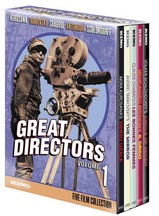 DVD Event of the Week: Is it the Restored Serials version of The Man From Beyond, the 1922 silent thriller with Harry Houdini (yes, him) as a man frozen in the Arctic ice for a century? Are we talking about Zeitgeist's new edition of the 1996 comedy Irma Vep, starring Honk Kong action babe Maggie Cheung? Or for the love of god, might it even be HBO's 23 disc set of The Wire: The Complete Series?

All worthy, to be sure, and I'm definitely going to say more about that Houdini flick in a few days, but for my money it's Kino International's fantastic budget priced box Great Directors Volume 1!

In any case, the films are all fascinating. The most accessible, unsurprisingly, is probably the Kurosawa, a labor of love project for the director -- it's about early Soviet surveyors braving the elements -- actually shot on location in Siberia over a period of two grueling years. The photography is stunning throughout and the Man vs Nature storyline is, as the kids say, awesome. The Chabrol thing, which wears its Hitchcock influences on its Gallic sleeve, is a little arch for my taste, although I really don't need much of an incentive to gaze upon the young Stéphane Audran. Il Grido also takes a bit of effort to get into, but its mix of romantic and psychological fatalism is ultimately quite gripping, and it's fascinating to see the uses the Antonioni makes of his unjustly undervalued American star, tough guy actor Steve Cochran.

The last two films in the set, however, are simply terrific. The Mirror is a kind of Russian version of John Boorman's Hope and Glory or Steven Spielberg's Empire of the Sun, which is to say it's about the horrors of World War II as seen through the eyes of a child, except that Tarkovsky gives you a parallel story about his adult life (similarly troubled, of course); it's all very stream of consciousness and dreamlike, with sequences of extraordinary visual poetry, but it packs an emotional wallop as well. And Schlöndorff's Circle of Deceit is a real movie movie, as they used to say; it's sort of about a Reagan Era German newman (the wonderful Bruno Ganz) who's having an affair with a Fassbinder icon (the equally wonderful Hannah Schygulla) in war-torn Beirut, but mostly it's about a bunch of burnt-out cases coping with the minute to minute danger of modern urban warfare and the moral ambiguities of Mid-East politics. Obviously, it's still remarkably relevant, and Schlöndorff's juggling of old fashioned war flick elan and documentary realism is utterly bracing.

Alas, there's no trailer online for the Schlöndorff, but here's the a clip from The Mirror, which should give you at least some idea of how Tarkovsky moves his camera around.

Anyway, bottom line is this is a real treasure trove of a set; you can and definitely should order it here for $59.96. That's marked down from its already ridiculously low suggested list of $79.95! Jeebus, people -- what are you waiting for? An engraved invitation?

And by "low budget" we mean as in genre films. In other words, what used to be considered drive-in fodder -- sci/fi and horror, western shoot-em-ups, crime flicks, stuff like that -- as opposed to art-house fare.

5. The Three Hundred Spartans (Rudolph Maté, 1962)
The film that made the young Frank Miller wet his pants, with all the good and bad that entails. In any case, a stylish low-budget knock-off of the big budget sword-and-sandal epics of its day; it works mostly thanks to emigré cinematographer turned director Maté's Expressionist visual flair.

4. Detour (Edgar G. Ulmer, 1945)
Z-picture noir -- shot in six days on a budget that wouldn't cover an afternoon's catering bill on a contemporary indie -- and utterly riveting. When people refer to Ulmer as the Poet of Poverty Row, this is probably the movie they're thinking of. 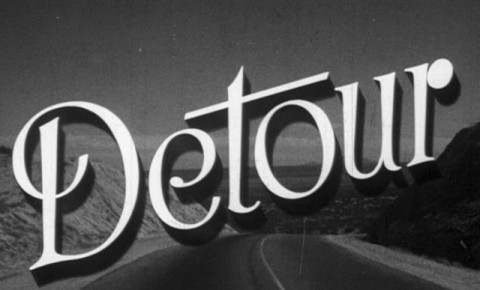 4. The Terror (Roger Corman, 1963)
Written and directed in approximately three days on leftover sets from The Raven with as much care and craftmanship as you'd expect from the famous Corman Touch. Compulsively watchable, for all the howlers, and it's always fun to see Jack Nicholson as the world's least believable dashing French cavalry lieutenant.

2. Tremors (Ron Underwood, 1990)
A terrific barely tongue in cheek homage to all those giant desert monster flicks of the 50s. More mid-budget than low by today's standards, but still pretty darned impressive in terms of making do with less. Spawned four sequels of varying quality, and a brief TV series that was better than it needed to be.

And the all-time coolest penny-pincher, it's not even close so don't give me a hard time or swear to god I'll smack you, is obviously --