Death of the Cool

A moment of silence, if you will, for one of the great heros of my youth -- Patrick McGoohan, Brooklyn-born British star of Secret Agent and much else, who passed away on Tuesday at the age of 80. 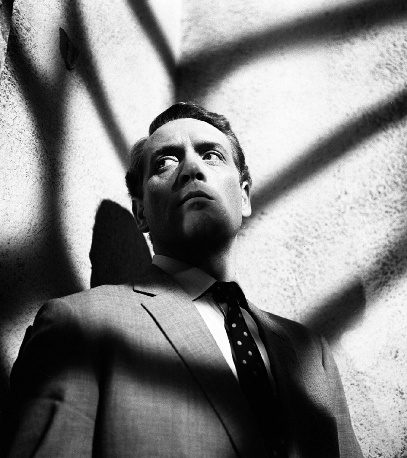 McGoohan's masterpiece, of course, is The Prisoner, the memorably existential and surreal sci-fi spy series he created, wrote and starred in, and which first aired in America during the summer of 1968, a culturally cataclysmic moment that the show both reflected and enriched. I've long thought that the shot in the show's opening sequence, of endless rows of filing cabinets receding into infinity as a mechanical arm drops an XXX-ed out punch card into one labeled "RESIGNED," is one of the most iconic of 60s images; likewise, McGoohan's voiceover "I am not a number -- I'm a free man!" has rightly entered the vernacular as an expression of resistance to enforced authoritarian conformity. And that's not even mentioning Rover, the show's sinister killer balloon, which is without doubt the most evocative cheapo special effect in TV history.

McGoohan had his fair share of other great TV and film roles over the years, including appearances as a murderer on Columbo for which he won a couple of Emmys (he and Peter Falk were great pals). In the early 60s, he played a scheming Iago in a modern day jazz version of Othello, Basil Dearden's All Night Long, and in the early 70s he also directed a rock version (Catch My Soul) starring Richie Havens. 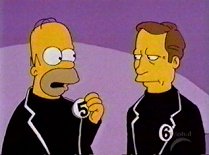 In 1995, he had perhaps his biggest success as the suavely evil Edward I in Mel Gibson's blockbuster Braveheart; in 2000, in one of his last appearances, he reprised his Prisoner role as the unbreakable Number Six in an episode of The Simpsons, "The Computer Wore Menace Shoes". In it, Homer Simpson wakes up in a prison disguised as a holiday resort called The Island. Dubbed Number Five, Homer befriends Number Six, who claims to have spent 33 years trying to escape (the amount of time between the end of The Prisoner and the premiere of this episode).

ITV is producing a Prisoner mini-series remake starring Sir Ian McKellan and Jim Caviezel, which will premiere later this year. I'll watch it with interest, but I think I can guarantee that regardless of its merits, Caviezel will lack a certain je ne sais quois -- i.e., cool -- the original's auteur routinely exuded from every pore.

Patrick McGoohan -- be seeing you.