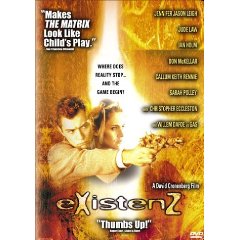 So as we mentioned yesterday, 1999 was a pretty good year for What is Reality? thrillers about computer-generated universes. Yes, The Matrix, starring Keanu Reeves as a guy who rightly goes "Whoa!", is the one everybody remembers, but as previously noted there were actually a couple of others at least as good if not better (albeit "Whoa!"-less).

In the not too distant future, world's leading game designer Allegra Geller (Jennifer Jason Leigh, less annoying than usual), is focus-group testing her new virtual reality game, eXistenZ. (This being a Cronenberg movie, however, the game isn't quite like PlayStation; its controller is a latexy pod made from the guts of mutant amphibians that plugs directly into the user's spinal column). The demo is interrupted by a fanatic anti-game assassin with bad aim, and Geller flees with marketing trainee Ted Pikul (Jude Law) who gets the thankless gig of bodyguard. Geller soon realizes that her pod, which contains the only copy of the eXistenZ program, is damaged; she talks Ted into accepting a gameport in his own body so he can play the game with her and figure out how badly. The rest of the film is an increasingly bizarre cross between road movie, thriller and hall of mirrors puzzler -- there are games within games, unsurprisingly -- and it winds up with an especially effective surprise ending that, depending on your perspective, is either a cheap ploy to set up a sequel or the definitive metaphysical switcheroo.

There's a lot more, including an even creepier than usual Willem Dafoe as Gas (the proprietor of the aptly named Gas Station -- interestingly, we never meet the proprietor of the equally aptly named Chinese Restaurant) and future Dr. Who Christopher Eccleston as a smarmy rep from the company that markets Geller's games. But the real star here is Cronenberg himself. The familiar biological obsessions (the assassin comes after Geller with a gun made out of human bones and teeth) notwithstanding, this is perhaps the most imaginatively surreal flick of his career; someday, somewhere, it will play on a double bill with his Naked Lunch and the ghost of Salvador Dali will be munching popcorn in the last row.

Here's the trailer to give you a little taste of its nifty mix of paranoid sci-fi and The Persistence of Memory.

So why wasn't this one as big as The Matrix? As with The Thirteenth Floor, the "Whoa!"-less factor may be relevant, but if I had to guess, I'd say it's because its take on the future is disturbingly plausible; in fact, the distance between a contemporary Xbox game and eXistenZ doesn't seem all that great (and less so since 1999). In any case, you can order it here and decide for yourself.