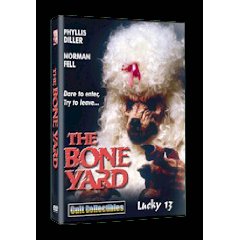 Shameless Cover My Tush Moment: Swear to god, I really and truly had planned to write about some movie or other that had at least a vague relevance to today's historic events. For the life of me, though, I couldn't think of one. So let me simply say "Yay, America!" and get on with business as usual, which in this case means marveling, as I did yesterday, at a forgotten but surprisingly interesting horror flick with an unlikely premise that I reviewed at Entertainment Weekly thousands of years ago.

Ladies and gentlemen, may I present The Boneyard!

Before achieving fleeting stardom on TV's Peyton Place, Ed Nelson was best known for roles in some of the nuttier drive-in flicks of the '50s (Invasion of the Saucer Men, Attack of the Crab Monsters) - the kind of low-budget messes justly loved by trash aesthetes everywhere. Thus, it's somehow fitting Nelson's career is winding down with the likes of The Boneyard; if ever a contemporary cheapo seemed destined for decades-hence cult status, this is it. The production values are appropriately nonexistent, and the plot is barely comprehensible (something about a police psychic having a spiritual crisis while marauding demons eat cadavers at a local morgue). Nevertheless, unlike most recent direct-to-video slashfests, this one plays with enough conviction and genuine (if nonsensical) originality that one suspects its writer-director, James Cummins, may actually have a glimmer of talent. In any case, it's all but impossible to resist a flick in which the two best monsters are a giant mutant French Poodle and a giant mutant Phyllis Diller. [B-]

Strong words and unminced, I think you'll agree, and I stand by every one of them. Boneyard auteur Cummins, incidentally, turns out to be a pretty highly regarded in the business FX guy, although from what I can gather he's been relatively inactive since the late 90s. In any case, here's the trailer for his masterpiece in case you think I was making up that stuff about the giant killer poodle.

And yes, if the above has piqued your curiosity, you can order The Boneyard here.

A Brief Postscript: If you were around here yesterday, you'll recall that I sang the praises of Maxim Xul, another no-budget horror flick I'd said nice things about at EW back in the day. This occasioned the following charming e-mail from the film's writer/director Arthur Egeli:

Yes, I remember that review very well, and it seemed like the coolest thing at the time - (and still is to me). I was in my twenties at the time and trying to raise money for another film. As anyone in the business may know, it's an uphill battle just to try and survive in Hollywood and then another to get yourself noticed. Then an investor I was pursuing happened to catch the review in EW and showed it to me. The fact that it was in a major publication made us all very excited. I wasn't asking the investor for that much, I think perhaps it was $10,000 or so, but it was enough to get the ball rolling and allow me to make another film,
The Art of Passion. Though I've had luck selling screenplays since then, I haven't been able to mount another feature, but I am still hopeful (I've been working on a project based on the Christa Worthington murder in Cape Cod). As you mentioned, I am a full time artist and happy to report that paintings and portraits are still selling despite the economy. Speaking of Maxim Xul in the air, I got a call over holidays inquiring about the rights to the film! The Xul still lurks!

Tags: The Boneyard, Invasion of the Saucer Men, Attack of the Crab Monsters, Maxim Xul
Print