Spent part of last weekend at my local Hell Octaplex and, seeking solace from assorted blockbusters, found myself at an afternoon showing of Last Chance Harvey. Turned out to be a thoroughly charming, splendidly acted (by Dustin Hoffman and Emma Thompson, principally) romantic comedy -- my colleague Phil Contrino gets it pretty much right here -- but for much of the film I found myself distracted by an astonishing resemblance.

Doubt -- Obviously lesbian nun Meryl Streep and pedophile priest Phillip Seymour Hoffman in a cage match battle to the death. Basically, just like Sleuth, only much gayer, and with a cameo by Jesus.

Bride Wars -- Kate Hudson is like -- what, twelve years old? -- and yet it appears she's already had major work done, if you know what I mean. Otherwise, a puckish satire of contemporary mores, and I anxiously await the sequel -- Episode V: The Caterer Strikes Back.

But I digress. In any case, I spent much of Last Chance Harvey convinced that Liane Balaban, the new to me young actress who plays Hoffman's about-to-be-married daughter... 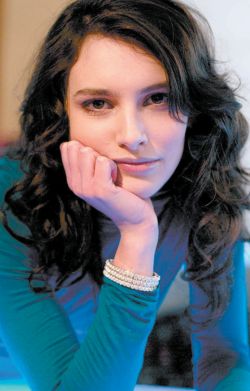 just had to be the real-life daughter of Mary Elizabeth Mastrantonio, of Robin Hood: Prince of Thieves and The Abyss fame. 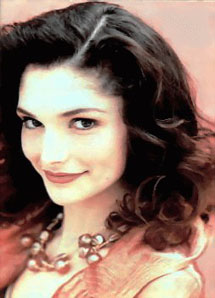 She isn't, actually, but the resemblance was unsettling enough to skew the film for me, at least on first viewing. Here's the trailer, where it's even more obvious than in the photo (check out the sequence approximately 30 seconds in).

Coming tomorrow: Seth Green and Jamie Kennedy -- the same person or what?