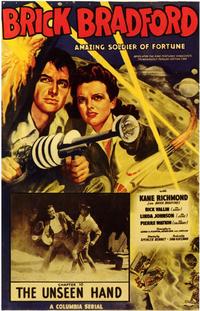 Okay, I can't help myself. Speaking as we were yesterday of Rod La Rocque and other outrageously phallic single-entendres, my thoughts (perhaps not inexplicably) turned to the 1947 Columbia serial Brick Bradford. Starring the astoundingly square-jawed Kane Richmond, an actor who looked more like a comic book hero come to life than anybody in screen history.

Intrepid adventurer Brick Bradford is assigned to aid Doctor Gregor Tymak, a scientist and inventor working on an Interceptor Ray that can destroy incoming rockets. Using a rocket ship of Tymak's design, he travels to the far side of the Moon, which suddenly has an atmosphere and a lost civilization that other people from Earth have already visited. Later, using the Time Top (another Tymak invention), he travels back to the days of the pirates to find a lost scrap of paper with some kind of nuclear equation on it. Returning to modern day Earth, he eventually chases down a spy who plans to use Tymak's Interceptor as a sinister death ray. The end...or is it?

All well and good, but have I mentioned that the Time Top looks like... 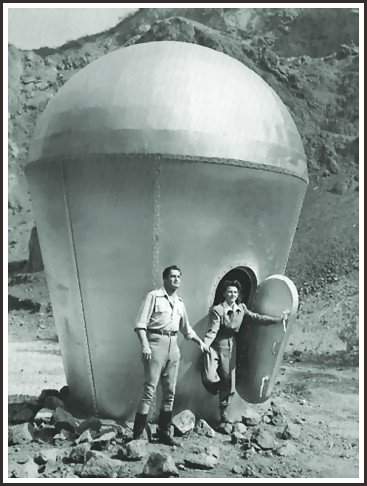 ...well, I think it's fairly obvious what it looks like.

I haven't seen the picture in years, but if memory serves its middle segment is full of preposterous in-jokes at its own expense, a fairly standard if endlessly amusing strategy employed at Columbia's serial unit in the 40s (see the collected works of James W. Horne). In any case, you can -- and I would say absolutely should -- order a DVD version of Brick Bradford here.