Weekend Cinema Listomania (Special Smile When You Say That Edition) 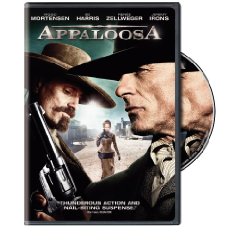 All worthy, to be sure, except for that last one, but for my money, it's Warner's version of writer/director/star Ed Harris's terrific new-fangled old-fashioned Western Appaloosa, with Viggo Mortensen, Renee Zellwegger and the suave and sinister Jeremy Irons.

Based on the 2005 novel by Spenser-auteur Robert B. Parker, Appaloosa is centered around lawman Virgil Cole (Harris) and his deputy Everett Hitch (Mortensen), two old friends who are hired to defend the titular wide open 1880s frontier town from a murderous rancher (Irons). Their relationship, both professional and personal, is inevitably disrupted by the arrival of a woman (Zellweger) who looks like the classic genre virginal schoolmarm, but who turns out to be, as they say, no better than she needs to be, and the rest of the story veers, interestingly, between love story and shoot-em-up; the effect is sort of like a cross between Jules and Jim and My Darling Clementine. Harris stages the thing as a neat mixture of the traditional (Irons is too good an actor to twirl his mustache, but it probably wouldn't have been inappropriate) and the revisionist (the weirdly polite sexual triangle that develops between the two lawmen and their mutual inamorata) and there's an interesting tension between the sort of painterly visual compositions (Frederick Remington portraits come to life) and the occasionally shocking explosions of graphic violence that punctuate the story. Mostly, though, it's the old-fashioned movie star charisma of the three male leads that makes Appaloosa work; here's the trailer to give you an idea of the charmingly familiar yet off-kilter feel of the whole thing.

Warner's DVD features a razor-sharp transfer with exceptionally vivid color and spectacular surround sound (some of the loudest gun shots since Shane); the disc also comes with your choice of widescreen (excellent) and full-frame (serviceable) versions. Extras include interesting audio commentary by Harris, some deleted scenes (no great shakes), and a bunch of making-of docs including a nice one featuring veteran cinematographer Dean Semler. Bottom line -- a terrific little film and package; you can -- and should -- order it here.

5. The Wild Bunch (Sam Peckinpah, 1969)
What people mostly remember about this are Peckinpah's revolutionary for the time balletic bloodbaths, but if there is a more tenderly moving scene than the one where the outlaws ride out of the Mexican town in the sunlit early morning as the villagers sing "La Golondrina," then I for one haven't seen it. A truly great film, not just a Western that changed all the rules.

4. Winchester '73 (Anthony Mann, 1950)
The revenge Western to end all revenge Westerns, with an absolutely chilling Jimmy Stewart as the owner of the titular rifle and the wonderfully weasel-ish Dan Duryea as the gunfighter who covets it.

3. Ride With the Devil (Ang Lee, 1999)
Inexplicably overlooked at the time, this moving, gorgeously filmed look at one of the Civil War's more obscure chapters features yet another brilliant performance by Jeffrey Wright and a script (by James Schamus) whose poetic period dialogue is one of the high water marks of recent screenwriting. If you haven't seen this, pounce, even if the prospect of co-star Jewel in the altogether leaves you cold.

2. Once Upon a Time in the West (Sergio Leone, 1968)
The Old West as a violent, sun-baked, bload soaked Italian verismo opera with some of the most gorgeous widescreen compositions ever. And Henry Fonda as a sadistic child killer, of course.

And the most memorable apres-Stagecoach oater is -- wait a minute? It's Japanese? -- is obviously

Hey, there's a reason Clint Eastwood and Leone remade this almost frame for frame with the location changed to Mexico.

Tags: Donna Flor and Her Two Husbands, Sonia Braga, Nip/Tuck, An American Carol, The Wild Bunch, Winchester '73, Ride With the Devil, Once Upon a Time in the West, Yojimbo
Print