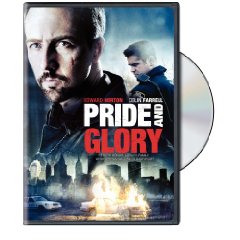 DVD Event of the Week: Is it the Criterion Collection's new version of Roberto Rossellini's 1966 avant-garde TV movie The Taking of Power By Louis XIV? Could it be Fox's sit-com box Reba: Season 5? Or against all odds, might HBO's collection of episodes from the sketch comedy series Little Britain USA conceivably get the title?

All worthy, to be sure (well, maybe not the Reba box), but for my money, it's New Line Cinema's Pride and Glory, the multi-generational policier starring Edward Norton and Colin Farrell.

This is, I'm aware, a minority opinion, and I will be the first to admit the film is a bit of a mess. The basic setup is familiar: Norton stars as Ray Tierney, an Irish cop (semi-retired since some vaguely alluded-to problems) from a family of same, including dad Francis (Jon Voight), brother Frannie (Noah Emmerich); and brother-in-law, Jimmy (Farrell). When a shooting involving a Hispanic drug kingpin leaves four officers under Frannie's command seriously dead, the patriarch convinces Ray to investigate the case, and eventually he uncovers a maelstrom of police corruption tracing back to Jimmy. Much foul-mouthed screaming and Code of Honor moral posturing ensues, and there are all sorts of seemingly gratuitous sub-plots -- including Frannie's wife dying of cancer -- that add to an overall level of overheated operatic melodrama.

But, but, but. All that said, writer/director Gavin O'Connor has a genuine feel for his New York City milieu (the film was shot mostly in Manhattan's Washington Heights), and he had the good sense or good luck to cast Edward Norton at the center of it. Norton dominates the film, somewhat paradoxically, by deft underplaying; there's a coiled intensity beneath even the smallest of his gestures, and when he's onscreen you can't take your eyes off him no matter what mishegass is going on around him. And he makes a terrific match with Farrell, who goes totally in the opposite direction, chewing copious amounts of scenery with obvious relish. In fact, there are moments between the two of them that approach the entertainment level of some of the all-time screen acting duels -- think Voight and Eric Roberts in Runaway Train and you have just an inkling. In any case, here's the trailer to give you a taste of the thing.

New Line's widescreen transfer is first-rate, doing full justice to O'Connor's muted color schemes; the disc also features a decent enough making-of documentary that you probably won't watch more than once. In any case, the film, with reservations, is definitely worth seeing; if I've piqued your curiosity, you can order it here. 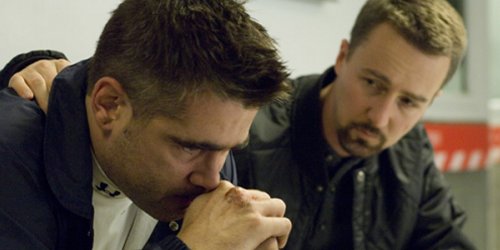 4. Collision Course (Lewis Teague, 1989)
Jay Leno(!) is the racist, sexist Detroit cop who breaks all the rules. Pat Morita(!!) is the straightlaced Japanese detective assigned to help him track down a high tech thief. It would be an exagerration to suggest that what ensues deserves as polite a term as "wacky."

3. Hot Fuzz (Edgar Wright, 2007)
A hotshot London detective (Simon Pegg) is cashiered out to the provinces and partnered with an overweight action-movie fan geek. An absolutely hilarious genre parody; worth the price of admission to see a local priest -- played by Paul Freeman, the suave Nazi villain in Raiders of the Lost Ark -- pull an Uzi out from under his cassock and start mowing down the locals.

2. Dead Heat (Mark Goldblatt, 1988)
Treat Williams is a zombie cop tracking down his own killer; Joe Piscopo is the partner that gets to say "Roger, I think this is the end of a beautiful friendship." I discussed this, er, classic in rather gruesome detail back in August; you can read it here, if you need a cheap laugh. 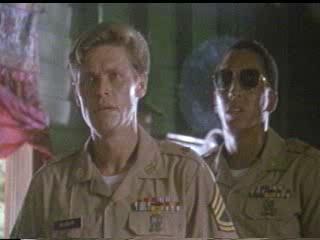 And the most memorable guy-on-guy-action cop flick, you gotta be kidding it's not even close so don't give me a hard time or I'll make a citizen's arrest, obviously is --

1. Off Limits (Christopher Crowe, 1988)
Two plainclothes American MPs (Willem Dafoe and Gregory Hines) investigate the serial killing of prostitutes in 1968 Saigon. A riveting thriller and, according to a couple of film buff vets I know, one of the few films about the Vietnam War to date that actually gets the day to day details right.