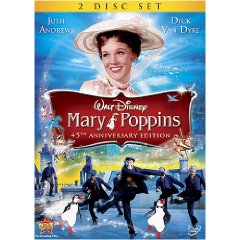 DVD Event of the Week: Is it Paramount's splendidly remastered (with cool bonus stuff) "I Love the 80s" edition of Top Secret, the comedy masterpiece from the ZAZ collective starring Val Kilmer as an Elvis-style pop star trapped behind the Iron Curtain? Might Sony's version of Lakeview Terrace, the latest ray of cinematic sunshine from Neil LaBute perchance qualify? Or against all odds, might The Weinstein Company's new disc of Vicki Cristina Barcelona, the possibly creepy sex farce in which Woody Allen gets to sleep with three gorgeous young actresses using Javier Bardem as his surrogate, conceivably get the title?

All worthy, to be sure, and I'm definitely going to write about Top Secret next week, but for my money it's gotta be Disney's deluxe two disc 45th Anniversay edition of the Julie Andrews musical fantasy Mary Poppins.

To be honest, I hadn't looked at the film in years, and I wasn't particularly a fan when it first came out. But having just watched it through adult eyes, I've decided -- on sober reflection and with one large, but not insurountable cavil -- that it's kind of a knockout. In particular, its blend of live action and animation, state of the art in its day, is still wonderfully effective; couple that with a charming story, great work by Andrews (a deserved Oscar winner) and, yes, really terrific songs, and you have if not the Great Movie Musical than at least a candidate for the Top Ten. Granted, I haven't forgiven Disney for mounting a Broadway version of the thing that has repeatedly interfered with my journey up 42nd street from the Port Authority Bus Terminal to the Number 1 train, and that I am thus unimpressed with the backstage documentary on the making of the show included on the new package's second disc. Nonetheless, the original movie is mostly unarguable, I think, and the new transfer here is absolutely eye-popping.

Here's the original trailer, looking rather the worse for wear compared to version on the DVD.

The Broadway documentary aside, there are lots of other bonuses with the set, most of them interesting, including a running audio commentary by the surviving creative principals (with archival comments by the still dead Walt himself), a seperate doc on the making of "Supercalifragilisticexpialidocious" (the score's most famous moment), and another one on the special effects. Oh -- and that cavil? Three words: Dick Van Dyke. I love the guy, but why Disney didn't cast an authentic Brit in the part of Bert the Chimney Sweep is kind of baffling. Watching him today, all I can think of is Conan O'Brien doing his "'Allo, guvnor!" routine; there's a certain level of High Bogus that's distracting.

That said, however, this is an exemplary presentation of a film that deserves it. You can -- and perhaps should -- order it here. 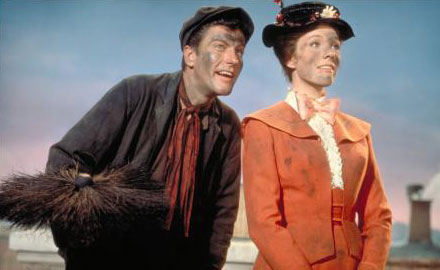 The Film You Most Enjoyed in Your Feckless Youth But Now Realize Wasn't Really All That Good !!! 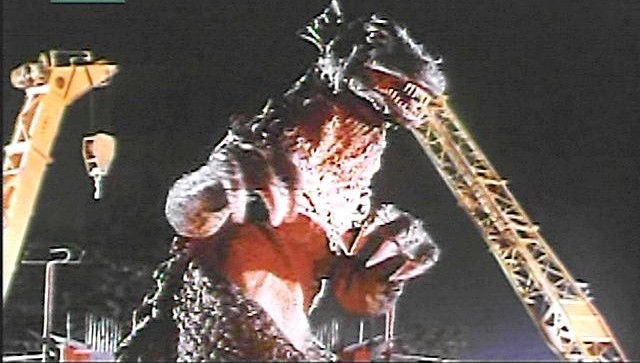 AKA The Irish Godzilla. When I saw this at the Oritani Theater in Hackensack NJ back in the day I was absolutely on the edge of my adolescent seat. Saw it recently and realized that despite a pretty good script and some appealing actors, the monster was still a guy in a rubber suit. Very disillusioning.

4. The Cabinet of Caligari (Roger Kay, 1962)
An extremely loose remake of the Expressionist silent classic, written by Psycho author Robert Bloch and starring Dan O'Herlihy in a weird beard. Creeped me right out as a kid, but when I saw it a few months ago it turned out to be a laughable mixture of ham-handed Freudian booshwah and soap opera histrionics. If ever a film cried out for an intro by Bad Cinema host Leonard Pinth-Garnell, this is it.

The way cool titular masked villain of this actually fun Republic Serial tagged all his henchmen with little electrical skull gizmos so he could hear them and kill them if they tried to squeal to the cops. There was a demonstration in the first episode and it scared the living crap out of me when I saw it on pre-PBS Channel 13 in the 50s. Today, I just think -- oooh, a joy buzzer.

2. Demetrius and the Gladiators (Delmer Daves,1954)

Saw this on the old NBC "Saturday Night at the Movies" in either 1961 or '62 and thought it was brilliant, especially Franz Waxman's score. The music remains terrific, but seen today, of course, it's a total camp hoot, especially Jay Robinson (as Caligula) freaking out when he can't use Jesus's bath towel to raise somebody from the dead. Sorry, Delmer -- not one of your best.

And my most memorable Not So Sweet Bird of Youth flick, it's not really even a contest, obviously is... 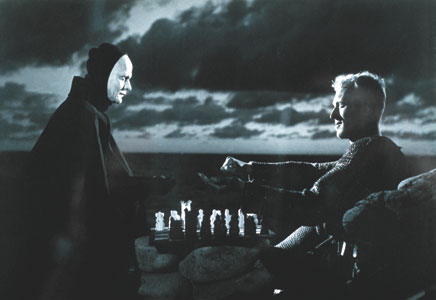 The teenage me thought this was the most profound thing I'd ever seen. These days, like most of Bergman, it strikes me as ludicrously pretentious and angst-ridden. Actually, I think I pretty much thought that after 1973, when the National Lampoon famously restaged the above scene for a book parody entitled "Bobby Fischer Teaches You to Cheat Death." With the chess champion's maniacally grinning face dropped in where Max Von Sydow had been.

On the other hand, it also inspired this hilarious take-off...

Awrighty now -- what would your choices be