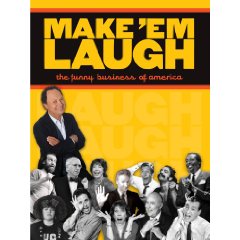 DVD Event of the Week: Is it Sony's The Films of Michael Powell, with stunning new transfers of the Technicolor WWII fantasy Stairway to Heaven and the more obscure 1969 Age of Consent, with a young (and naked, 'natch) Helen Mirren? Might it be Universal's self-explanatory Battlestar Galactica: Season 4.0? Or, against all odds, would Anchor Bay's Righteous Kill, starring Al Pacino and Robert DeNiro as veteran cops even less interested in whodunnit than director Jon Avnet, be the one to make the cut?

All worthy, to be sure (except perhaps for that last), and if I can manage to shnorr a copy of that Powell box I'll be writing about it ASAP, but for my money it's Rhino's swell new three disc set of the PBS documentary series Make 'Em Laugh: The Funny Business of America.

Directed and written by Michael Kantor and Laurence Maslon, M'EL is exactly what it sounds like -- a six hour, six episode chronicle of a century of American yocks from Charlie Chaplin to Jon Stewart, organized by genre (slapstick, satire, stand-up, sit-coms) and told in a slickly mounted melange of vintage performance footage, brand new interviews, and all sorts of mostly fascinating historical background stuff to put it in context. Billy Crystal hosts it; Amy Sedaris is the narrator.

It's not a perfect package; the narration suffers a bit from "The Blues came up the river from Mississippi" obviousness, and because everybody is celebrated pretty much equally, there's a certain hagiographic feel that can get a little cloying. Mostly though, there's so much passionately funny stuff here that the flaws don't really matter. I, for one, had forgotten how darkly original Jonathan Winters was at his peak, and it's worth the price of admission to hear an un-stoned Cheech Marin cogently discoursing on why Lenny Bruce was more than just a wiseass Jew with a foul mouth. There are also a couple of jaw-dropping historical rediscoveries that are guaranteed to make you sit up and go "Huh?", in particular the young Woody Allen cavorting with showgirls on some mercifully forgotten variety show and, perhaps most interestingly, a brief montage of TV appearances by the now inexplicably obscure Jean Carroll, a proto-feminist comic of the 50s and early 60s who in many ways was the original desperate housewife.

PBS will be airing the show over the next three weeks, but Rhino's box set version has bonus stuff -- more interviews, more performance footage -- up the proverbial wazoo; essentially, you get six more episodes, all worthy and thought provoking. Bottom line: You can -- and should -- order it here.

Best or Worst Feature Film Based on a Previously Existing TV Show!!!

5. McHale's Navy Joins the Air Force (Edward Montagne,1965)
It doesn't even have Ernest Borgnine, for crissakes. 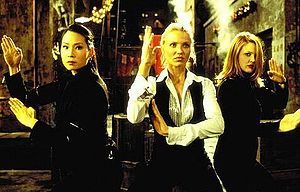 4. Charlie's Angels: Full Throttle (McG, 2003)
The absolute nadir of contemporary action films, visually incoherent and ugly, and with a screenplay that seems to think, if that is the word, that non-stop "ironic" pop culture references are a perfectly acceptable substitute for anything resembling a depiction of life as it has ever been lived by anybody. A serious candidate for the worst movie ever made, now that I think of it.

3. The Fugitive (Andrew Davis, 1993)
I know some people enjoyed this as a thriller, but to say that it lacks the existential melancholy that made the TV show on which it's based so memorable is to considerably understate my dislike for it, the presence of the adorable Sela Ward notwithstanding.

2. Serenity (Joss Whedon, 2005)
Whedon's Firefly TV cowboys in space with a bigger budget, and although it pains me to admit it, far better than any Trek movie of recent vintage.

And the most memorable TV derived feature, I will brook absolutely no disagreement on this point, obviously is -- 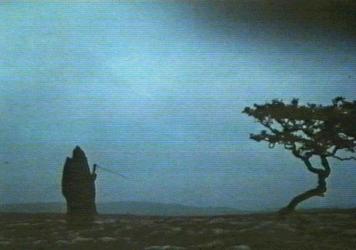 Dark, despairing, and absolutely hilarious. I remain convinced that the reason they never made another movie as a group had less to do with the death of Graham Chapman than with the fact that after this they had pretty much said everything they ever wanted to say.