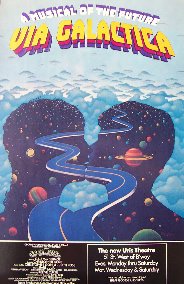 Okay, I don't remember where I heard this one, and I haven't been able to find any independent verification of either the general outlines of the story or its details on the Intertubes. Nevertheless, I totally believe it's true, and if it isn't it ought to be.

In any case, it involves Via Galactica, the most expensive Broadway flop of its day (1972). Featuring songs by Hair composer Galt McDermot, it was a rock musical that closed after seven performances and lost a million bucks, a record at the time. How terrible was it? According to contemporary accounts, the storyline was so incomprehensible that at the last moment the producers were forced to insert a plot synopsis in Playbill; audiences were still absolutely baffled by the mishegass they were witnessing on stage, however.

More to the point, the show -- which was legendarily troubled during its pre-production process, with lots of attendant bad press in Variety, et al -- was slated to star original Catwoman Julie Newmar, the amazingly statuesque TV and movie actress who inspired the great 1995 film To Wong Foo, Thanks for Everything! Julie Newmar... 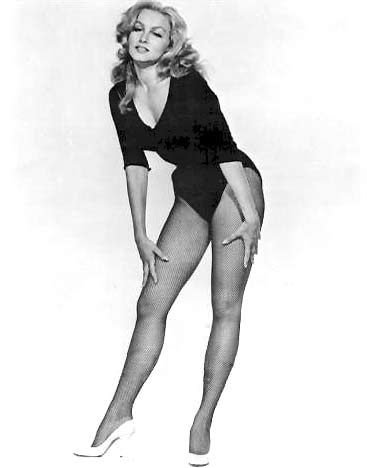 ...and the wonderful dwarf actor Michael Dunn, of Star Trek and Ship of Fools fame. 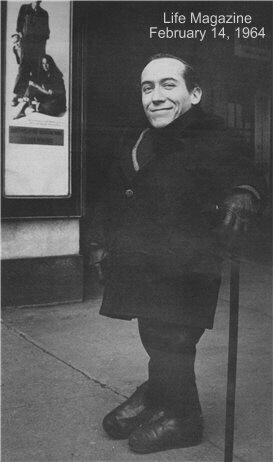 Now it seems that Dunn, who despite his diminutive stature had a reputation as a ladies man and who -- like many of his vertically challenged ilk -- had a serious thing for, shall we say, taller women, was constantly in Newmar's face during the show's already arduous rehearsals. Newmar, of course, being the Mount Everest, the ne plus ultra, the Michelle ma belle, if you will, of taller women.

In any case, Newmar took it all with great grace and patience, but over the period of several weeks her utter unflappability in the face of Dunn's constant leering come-ons only served to inflame the little feller even more.

Finally, he could take it no longer, and in the middle of a particularly grueling pre-premiere run through he stopped the scene cold, fixed Newmar with an intense stare for all the company to see, and announced, loudly, "Julie -- tonight I'm going to f**k you silly."

To which Newmar, without batting an eye, replied "Michael -- if you do, and I find out...."

Like I said, if this story isn't true, it really out to be.