Okay, I think we're all agreed that Sunday's Academy Awards show was, on balance, only marginally more entertaining than the sound of a medeival peasant having his eyes gouged out with a burnt stick. But in fairness, before we move on with our lives I feel constrained to point out at least one moment that made me sit up and go "Right On!"

As the kids say.

Confessions of a Shopaholic -- An airhead runs up a sixteen thousand dollar credit card bill on high-fashion scarves and in the current catastrophic economic climate I'm supposed to care? Plus: Any movie that wastes John Lithgow and the majestic Wendie Malick can, frankly, bite me.

The International -- Clive Owens really needs a shave, and Naomi Watts mostly phones it in, but on balance a genuinely suspenseful and visually impressive thriller. In fact, the big shoot-out scene inside the Guggenheim Museum is actually almost worthy of Hitchcock. I said almost.

He's Just Not That Into You -- The Mac kid from the PC/Mac commercials plays a smarmy, shallow cad. Unkind!

Anyway, it happened during the obligatory dead people montage, this year bookended by Queen Latifah singing "I'll Be Seeing You" with all the passion and sincerity of Harry Connick Jr. in the piano lounge of a 747.

If truth be told, I was starting to nod off at this point, but suddenly -- at approximately 2:51 min. above -- what to my wondering eyes should appear but a clip of Maila Nurmi, a/k/a TV's Vampira and the star of Ed Wood Jr.'s immortal Plan 9 From Outer Space. Sandwiched in between tributes to French director Claude Berri and Isaac Hayes. 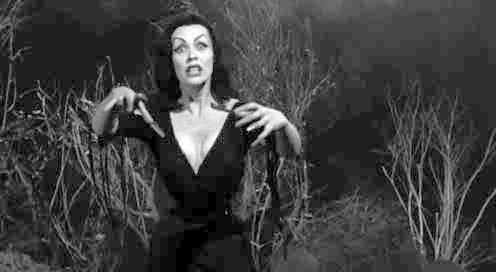 Seriously -- back in 1961, if you had interrupted me as I watched Nurmi strut her stuff on my local TV Chiller Theater show to ask "Hey Steve, do you think you'll ever see this babe on the Academy Awards?" I suspect my answer would have been "I'm too young to even know what drugs are, but I'm willing to bet my lunch money you're on extremely potent ones as we speak."

Kudos to the Academy, in other words. And the inclusion of snarky radical film critic Manny Farber (at 3:10) was a nice touch as well.

The show still sucked, of course.

Tags: Confessions of a Shopaholic, John Lithgow, Wendie Malick, The International, He's Just Not That Into You, Plan 9 From Outer Space, Ed Wood Jr.
Print