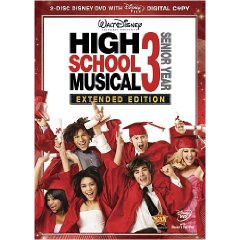 DVD Event of the Week: Is it Sony's version of Five, the rarely seen and interestingly quirky post-nuke apocalypse flick from oldtime radio auteur Arch Oboler? Might Universal's disc of Clint Eastwood's Changeling, starring the still impressive lips of Angelina Jolie make the cut? Or against all reason, could Warner Home Video's edition of Body of Lies, the Leonardo DiCaprio/Russell Crowe CIA thriller directed by Ridley Scott actually be The One?

All worthy, to be sure, but for my money (more in amazement than in anger) it's just got to be Disney's new High School Musical 3 -- Senior Year: Extended Edition.

Now, I must confess, I hadn't seen the first two films in the series until recently, but I actually plunked down twelve bucks to see the third in a theater last October just to get the whole zeitgeist thing. Cultural literacy, and all that. Anyway, my point is I didn't really know what to expect, but I can state categorically I wasn't ready for this. And by this, I mean "Scream," which just may be the most jaw-droppingly awful musical number in the history of cinema.

Actually, for legal reasons, I can't show it to you, but that shouldn't stop you from seeking it out on YouTube. Meanwhile, there's a brief snippet of it in the official Disney sanctioned trailer below, and you'll get the idea.

Anyway, as I wrote at the time, "Scream" features the unwaxed eyebrows and boundless teen energy that is HSM3 star Zac Efron doing his impression of Flashdance star Jennifer Beals having a nervous breakdown. Of course, Beals never had to deal with an attack by multiple basketballs or gratuitous Caligari-esque camera angles, but after all this is an age of diminished expectations. And it should be noted that the deep psychic anguish being dramatized in "Scream," the existential dilemma facing Efron's character which brings on this musical and terpsichorean cri de coeur, is...whether or not to accept an athletic scholarship or one to the arts program at Juilliard. I am not making this up.

I should also note that "Scream"and the rest of the numbers in the trailer above were choreographed by one Charles "Chucky K." Klapow. I mention his name only because knowing it might help you to avoid encountering more of his work in the future. You're welcome.

In any case, as for the rest of the film, the only thing left to say about it is that its success -- and the success of the whole HSM franchise, actually -- is conclusive proof that the Culture Wars of the last several decades are over and that the Blue States won. Seriously -- this is the gayest movie I've ever seen. I mean that in a good way, of course. But Oscar Wilde only wished he was as gay as this movie; not for nothing, I suspect, did New York Times critic Stephen Holden -- a grown man, for crying out loud -- say of the film's characters "You want to leave the world behind and be one of them now and forever." I mean, really, this is Just So Gay.

My personal issues with the film aside, the extended edition HSM3 package comes with all the usual bells and whistles, which is to say that along with a first-rate letterboxed transfer that does total justice to the film's psychedelically vivid color schemes, you also get a plethora of making-of documentaries, a bunch of deleted scenes introduced by director Kenny Ortega, and a sing-along segment for fans with a taste for Rocky Horror style audience involvement. There's also a digital copy disc in case you're moved to watch the thing on your iPod between classes. 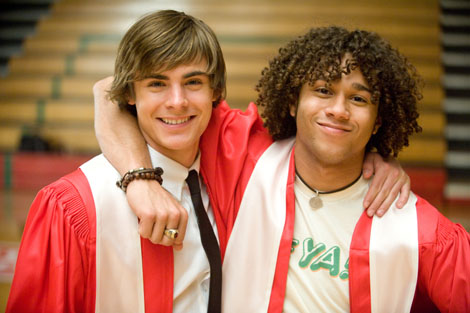 Most Memorable Teen Flick Ever!!!

Essentially, The Day the Earth Stood Still with acne, and it is perhaps no accident that it was memorably mocked on one of the best episodes of MST3K . Interesting historical note: Shortly after the film's release, the stressed-out director (above right), who was boinking its male star at the time, bought a bizarre ad in the Los Angeles Times proclaiming that he was to be called Jesus Christ II and that God had shown him truth and love. I am not making this up either.

4. Heathers (Michael Lehman,1989)
Christian Slater and Winona Ryder in a postmodern black comedy version of Love Laughs at Andy Hardy. The greatest high school movie of all time, and if scripter Daniel Waters never writes another line, he deserves to be immortal for "Dear Diary, my teen-angst bullshit now has a body count. " 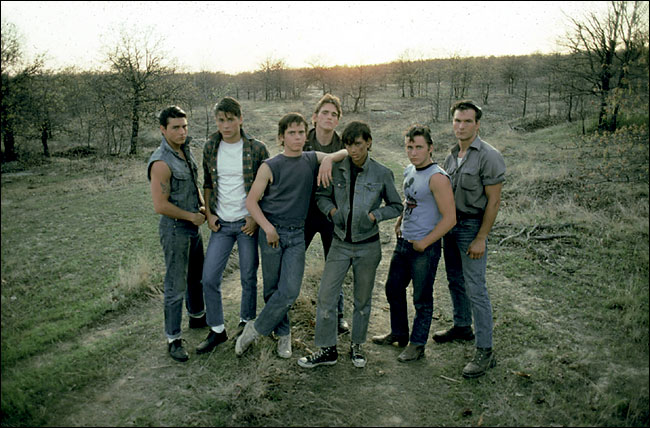 2. Les Enfants Terribles (Jean-Pierre Melville, 1950)
Weird psycho-sexual gamesmanship between a reclusive teenage brother and sister, from the novel by Jean Cocteau, who knew about such things. Stylish and haunting.

And the most impossible to forget Twixt Twelve and Twenty flick ever, there's really no possible other choice so just give me this one, okay? is definitely ....

Serious sci-fi/horror marketed as an exploitation flick, and not strictly speaking a teen film -- the titular damned are kids around eleven or twelve, and the biker gang in the clip above are played by actors a tad protracted in the molar. Still, its use of puberty as a metaphor for the end of the world makes it pretty much the quintessential teen-angst picture of a decade that had lots of them.