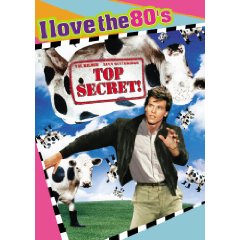 And now folks, as promised during Friday's Cinema Listomania, we will sing the praises of Paramount's new DVD version of the 1984 comic masterpiece (yes, I said masterpiece) Top Secret. Starring Val Kilmer (making his film debut) and the unjustly forgotten Lucy Gutteridge, a lovely and talented actress who I am shocked to learn is now in her early 50s and living in retirement on the Isle of Wight. God, I feel old.

New in Town -- A large talking chipmunk (voice of Renée Zellwegger) moves to Minnesota and everybody makes her tapioca. Uneasy mix of live action and animation, but Harry Connick Jr. gets shot in the ass so it's worth seeing.

Taken -- Liam Neeson, star of Schindler's List and an alumnus of the Abbey Theatre, has the role of a lifetime as a Jack Bauer wannabe who connects high-voltage electrodes to a bad guy's gonads.

For those who've never seen it (and you are legion, alas ) Top Secret is a deliriously funny cross between an Elvis Presley musical and a Cold War thriller -- think It Happened at the World's Fair meets Torn Curtain -- which features Kilmer (years before his sorry turn as the voice of a car in the current and ill advised revival of TV's Knight Rider) as Nick Rivers, America's newest rock sensation (big hit: "Skeet Surfing"). Rivers, on tour in East Germany, is unaware that he's the lynch pin of a sinister Commie plot for world domination. Gutteridge is Hillary Flammond, the daughter of an East German scientist whose work is being perverted for the Commies dreadful plan.

They meet cute in the supper club at the Hotel Gey Schluffen, where the following exchange sets the general tone for the film.

Hillary Flammond: It's a German name. It means 'she whose bosoms defy gravity'.

Nick Rivers: I'm pleased to meet you. My name's Nick.

Hillary Flammond: Nick? What does that mean?

Nick Rivers: Oh, nothing. My dad thought of it while he was shaving.

My feeling is that if you don't find that amusing, there's no hope for you, but in any case, here's the trailer (included on the new DVD), which gives a reasonable idea of the film's general level of sublime silliness.

Why do I love this film? Well, for lots of reasons, starting with a higher inspired-joke-per-minute ratio than any comedy in memory (with the exception of The Simpsons Movie). Then there are the movie parodies within the movie (the evisceration of The Blue Lagoon is especially heartwarming), some truly lunatic moments of surrealism (the spotted cow in the galoshes, the giant statue of a carrier pigeon with people sitting on it), and Kilmer's performance as the pre-Beatle rock star, which I have long suspected is what convinced Oliver Stone to give him the gig as Jim Morrison (in many ways, the Doors frontman came off as a slightly addled version of the fictional Rivers). The icing on the cake are the original songs, genre send-ups that stand on their own ("Skeet Surfing" is the best Beach Boys anthem the lads from Hawthorne never got around to doing) and occasionally even transcend their parody/homage status. Here's my favorite, an over-the-top Elvis-style production ballad that nails the mawkish self-pity of its ilk and any number of other worthy targets at the same time.

Top Secret, which flopped in its original theatrical release, was the followup to the superficially similar Airplane, and like that acknowledged classic, it was written and directed by the ZAZ team, a/k/a Jerry Zucker, Jim Abrahams and David Zucker, all of whom show up on a very funny running audio commentary on the new DVD. David Zucker, of course, is the formerly amusing fellow responsible for the 2007 political ad below --

-- the sheer multi-dimensional awfulness of which demonstrates in retrospect that he had in, fact, already gone completely bats**t insane some time before he directed the 2008 mega-flop rightwing screed An American Carol.

In any case, the new DVD features a transfer that's a marked improvement over the previous video version (a 2004 double feature disc with Airplane) which was unpleasantly soft and washed-out looking. It also includes a few deleted scenes (which you might have seen in the re-edited version that shows up occasionally on non-cable TV) and some original storyboards. Paramount is releasing it (along with a similarly spruced up version of the ZAZ guys more successful The Naked Gun) as part of their kind of lame "I Love the 80s" promotion, which is to say that this comes with a bonus audio CD of MTV hits by the likes of a-ha, Erasure and INXS.

That notwithstanding, you can -- and definitely should -- order the package here.

And bonus points to anybody who gets the relatively obscure pop culture reference in this post's title. Here's a link to it, but no peeking until after you've guessed.