A few notes in passing on MGM's new two-disc DVD version of the 2008 James Bond smash Quantum of Solace, in stores today:

The widescreen transfer on disc one looks and sounds great, as you'd expect. The film itself, however, is a very mixed bag, IMHO. On the downside, a lot of the action sequences -- obviously done in emulation of the Bourne movies -- are frankly incoherent. Plus, Bond himself is so depressed and alienated you'd think he wandered in from an old Antonioni flick, and it's kind of a drag that they kill off the most likeable Bond girl ever -- the adorable Gemma Atherton as a "Why Miss Smedley, you're beautiful with your glasses off" MI6 desk jockey -- simply because she has a role in the hay with 007. On the plus side, star Daniel Craig remains a compelling presence, some of the art direction nods very amusingly to Ken Adam's 60s high-tech villain's lair from Dr. No, and Jeffrey Wright, reprising his role as Bond's CIA buddy Felix Leiter, all but steals the film in a brief barroom scene.

Here's the trailer to give you an idea of the feel of the thing.

Disc two has a lot of mostly serviceable bonus stuff, which is to say the usual backstage making-of documentaries, including a long sequence with director Marc Forster. The best of the bunch is probably the segment on the creation of the film's musical score, featuring composer David Arnold twanging out the famous Bond theme on an old Epiphone acoustic-electric guitar. I don't know if there's anything here overall you'll want to watch more than once, but if you're a Bond completist/film geek you'll probably have a good time with it the first time around.

Okay, all that said, I would be remiss if I didn't offer the following image -- all but ubiquitous in the civilized world last year in the lead-in to the film's opening -- 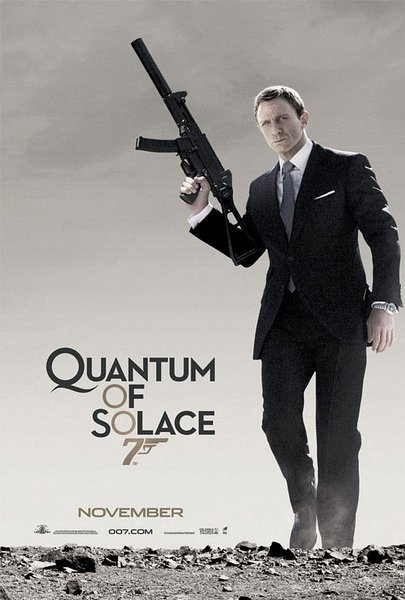 -- and note its shall we say eerie resemblance to a parody Bond poster that appeared in the old National Lampoon back in the 70s. In it, Sean Connery as 007 was posed more or less in the exact same stance as Daniel Craig above, except that there was a strange lump under his expensive suit that seemed to run from his mid-section around his back and finally up over his shoulder.

The fake film being advertised was entitled The Spy With the Biggest Penis in The World.

In any case, if you're of a mind to, you can order the special edition Quantum of Solace right here.