The Genius of Larry Cohen (An Occasional Series): Part Deux 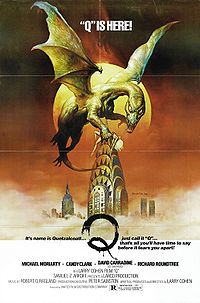 And speaking as we were last week of the great and hilariously subversive maverick filmmaker Larry Cohen, it is perhaps time to sing the praises of one of the most interesting of his mid-80s run of films starring Michael Moriarity, a shall we say eccentric actor who functioned as the scenery chewing Robert DeNiro to Cohen's low-budget Martin Scorsese.

Watchmen -- Interminable bong-hit Nietzche with occasionally striking CGI stuff, but if you're a hormonal 16 year old boy, I guarantee you're really going to appreciate the hot lesbian re-staging of the famous VJ Day photo of the sailor kissing the girl in Times Square.

In any case, I am referring, of course, to the touching story of a boy and the prehistoric lizard who loves him -- the 1982 creature on the loose epic Q The Winged Serpent.

A weird religious cult has resurrected the Aztec god Quetzalcoatl, a gigantic flying whatsit that resembles a cross between a pterodactyl and the Loch Ness monster, in present day New York City; said beastie has taken to snatching people off skyscrapers and eating or dismembering them, which in the early days of the Reagan era causes less excitement than you might think. Nevertheless, David Carradine and original Shaft star Richard Roundtree are on hand as police detectives investigating the sudden rash of suspicious deaths. Meanwhile, a failed lounge singer/petty criminal (Moriarty), on the run after a failed robbery, accidentally discovers the creature's lair in the uppermost spire of the Chrysler Building and tries to blackmail the city into paying for the info. The rest of the film alternates between Moriarity auditioning for a gig as a sort of schlubbier, not gay Michael Feinstein (attentive viewers will recognize the legendary Greenwich Village club The Bitter End) and the sort of forensic work that has since become a TV staple on shows like CSI, and it all wraps up with a big concluding King Kong-ish shoot-em-up; the airplanes don't get Q, but sharpshooter Carradine does.

And lest you think I'm making any of this up, here's the aforementioned big King Kong-ish finale. (Incidentally, the stuff in the Chrysler Building was not shot on fake sets; apparently, Cohen discovered that the Art Deco landmark's top section is basically an unfinished attic with two-by-fours on the floor and got permission to get a film crew and his actors up there.)

In any case, the end result is unquestionably the Citizen Kane of Giant Reptiles Eating People in Manhattan Movies; you can -- and most definitely should -- order it here.