The Genius of Larry Cohen (An Occasional Series) 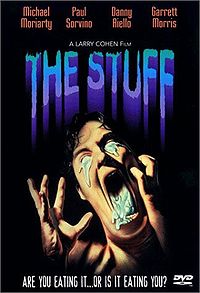 Attentive readers who were around for Friday's Cop Movie Listomania will recall that I sang the praises of Maniac Cop, a 1988 exploitation thriller (with a self-explanatory title) written by the great Larry Cohen.

I'm a huge fan of Cohen -- he's had an amazing career, which has ranged from creating the TV classics Branded and The Invaders in the 60s to writing the nailbiting Colin Farrell thriller Phone Booth in 2003 -- and have been ever since he invented the killer baby genre with the outrageous It's Alive in 1972 (anybody want to bet that Seth McFarlane cribbed Family Guy's homicidal infant Stewie from that little opus?). But some of Cohen's best and most gloriously over the top work was a mid-80s run of films starring Michael Moriarity, a shall we say eccentric actor who functioned as the scenery chewing DeNiro to Cohen's subversive Scorsese.

And my favorite of that batch is, unquestionably, 1985's The Stuff, a hilarious mix of Invasion of the Body Snatchers and The Blob that also functions as one of the most trenchant critiques of American consumerism ever committed to celluloid.

Coal miners discover a mysterious, sticky white glop with a sweet and highly addictive taste. A mega-food company eventually markets it with the brand name The Stuff, selling it in half-liter containers (kind of like the then familiar Häagen-Dazs
boxes) and hyping it as being totally filling despite having zero calories or fat. With ice cream sales tanking, industry execs hire an industrial saboteur (Moriarity) to find out exactly what the glop is and destroy it. Mucho wackiness ensues, but in the end Moriarity learns that The Stuff is actually alive and sentient; eat enough of it, and it will take over your brain and mutate you in a zombie. Paul Sorvino co-stars as a retired general who leads an anti-Commie militia battling the zombies. Ex-SNL star Garrett Morris is also on hand as a cookie magnate a la Wally (Famous) Amos, and Andrea Marcovicci is an advertising exec who provides the unlikely love interest for the disarmingly unhinged Moriarity.

Here's the trailer to give you an idea of the film's overall level of brilliant mishegass.

Needless to say "Are you eating it...or is it eating you?" is one of the Top Ten movie ad tag lines of all time.

In any case, if the above interests you (and frankly, if it doesn't I don't want to know you) you can order it here. I should add that Anchor Bay's transfer looks typically excellent, despite the film's obvious low budget, and that the disc has a running audio commentary by The Stuff's still-working auteur .