The Robe Rules II: The Gods Must Be Overacting 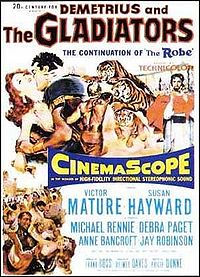 And speaking as we were yesterday of the possibly controversial restored version of the 1953 Romans versus Christians epic The Robe, I'd be remiss if I didn't put in a good word about its as yet unrestored and in many ways more entertaining sequel Demetrius and the Gladiators, originally released in 1954. Directed in some haste by the possibly underrated Delmer Daves -- as we learned in a making-of doc included with the Special Edition DVD of The Robe, production on it began barely three weeks after its predecessor wrapped -- and featuring most of the original cast, it benefits from the absence of Richard Burton's insufferable character (martyred at the conclusion of the first film) and a return performance by the incomparable Jay Robinson, as the mad Emperor Caligula, that's even more magnificently fruity than his work in the original.

Here's my favorite scene to give you an idea of the, shall we say, flavor of the thing.

Two notes in passing: Demetrius made its television debut, in color, in 1961, as part of the debut season of NBC's Saturday Night at the Movies, the first primetime network show devoted to feature films. I vividly recall seeing it on a 17 inch black-and-white set in my parents living room at the time, as well as my reaction to Robinson's emoting in the above scene, which I think was best expressed by my barely teenage self as "What the f**k was that about?"

Also, the guy playing the centurion who picks up the discarded robe of Christ at the conclusion of Robinson's tirade is none other than the great William Marshall, the African-American Shakespearean actor today best known for his work as the titular bloodsucker in the 1972 schlock horror classic Blacula. At the time, a saddened Marshall said of his role as the vampire villain "The tragedy of it is, the only reason I got the part is because I'm black," a plaint that led a wag at Esquire magazine, in its annual Dubious Achievement Awards, to note "Funny -- we thought it was because you looked good in a sweater."

Ahem. In any case, Demetrius can currently be found on a DVD from 2001 available here; if the above has piqued your interest, however, we advise waiting until Fox Home Video gets around to restoring it, which should be soon.