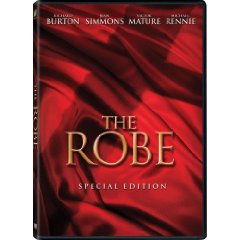 The Lord moving in mysterious ways, as they say, the latest could-be-controversial restoration of a big deal classic film -- in the wake of The French Connection and Pinocchio -- is now with us, and it has a distinctly religious theme. I refer, of course, to Fox Home Video's brand new DVD and Blu-ray Special Edition of the 1953 Romans versus Christians blockbuster The Robe, out yesterday.

The film's historical importance is beyond question, of course -- it was the first picture released in CinemaScope and multi-channel stereo, and the first blockbuster in the modern sense (yes, I know Raoul Walsh's 1930 The Big Trail was filmed in 70mm, and Fantasia had multi-channel sound in 1940, but those were experiments; The Robe set a new industry benchmark). Dramatically, it's something else -- a bit stodgy by contemporary standards, and Richard Burton's character ( a disolute Roman aristocrat who finds Jesus) gets kind of insufferable in the film's third act. But director Henry Koster makes very good use of the newly spacious vistas afforded by CinemaScope, and the whole thing still looks quite spectacular even today, although some of the matte work to suggest the glory that was Rome is a little obvious. The Robe also benefits enormously from Alfred Newman's orchestral score, which is gloriously melodic from stem to stern. I would also be remiss if I didn't make note of the incomparably fruity performance by Jay Robinson as the mad Emperor Caligula, one of the greatest over-acting jobs in screen history. Robinson himself shows up in the very good making-of documentary included in the Special Edition and I was, shall we say, amused to hear him claim that he'd wanted to play the part even broader, but director Koster insisted on reining him, the bastard.

In any case, here's an unrestored version of what appears to be a re-release trailer to give you an idea of what the film is like (oddly, the original promo isn't in the new package).

The Special Edition has some more bells and whistles, including a very informative running commentary by Newman's composer son David, a still gallery, and an intro by the amazing eyebrows that are Martin Scorsese (one of the film's biggest champions). But now comes the big question -- does the restoration work or not?

Sorry to be a weasel about it, but the answer is -- I haven't made up my mind yet. About the sound, I have no doubt -- it's been bumped up to 5.1 surround since the film's last appearance on video, and it plays like gangbusters. Visually, however, there' s something about the new version that I can't quite put my finger on; on DVD at least (I haven't auditioned the Blu-ray) the images are sharp as a tack and everything looks as prisitine as can be, but the colors struck me (at first viewing) as a little...well, digitally enhanced. The new Robe doesn't look the way I remember Technicolor epics of the period; the film seems (and I hate to use a loaded word) Colorized.

That may just be me, of course, and I'll get back to you after I've seen the Blu-ray. In the meantime, with perhaps temporary reservations, this is a terrific presentation of a movie that deserves it. You can -- and at these prices should -- order it here.