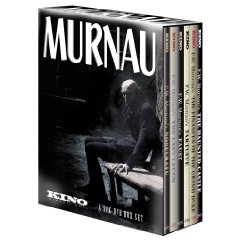 Video Event of the Week: Is it Sony's rushed to the market edition of Gus Van Sant's Milk, with Sean Penn in his Oscar-winning performance? Might it be the Miramax DVD of Happy-Go-Lucky, the latest effort from director Mike Leigh? Or against the odds, could Magnolia's new version of the spectrally beautiful Swedish vampire flick Let the Right One In get the nod?

All worthy, to be sure, but for my money it's got to be Kino International's astounding new box set of six restored silent films by the great F. W. Murnau.

Kino has already released four of the films in question -- Nosferatu, Tartuffe, The Last Laugh, and Faust -- in seperate editions (that last just a month or two ago), but two of them -- The Haunted Castle and The Finances of the Grand Duke -- are new to video. The former, from 1921, is Murnau's first tentative foray into something like a horror film; as the title suggests, it's an old dark house ghost story (and a particularly satisfying one). The latter, from 1924, is not typical Murnau at all; it's a sort of comedy spy thriller anticipating both Lubitsch and Hitchcock (the script is by Fritz Lang's wife Thea von Harbou, not usually noted for her light touch). Both of them, however, are chock full of the visual flourishes that one expects from its auteur, one of the supreme stylists in screen history, and like the others in the set, the restorations are staggeringly good -- it's almost imcomprehensible that these films look as pristine as they do given their age.

The true marvel of the set however, at least for me, is the 1926 Faust, which is as audacious as anything you'll ever see. A sprawling adaptation of the Goethe original, it's on the same monumental scale as Lang's Metropolis, but with a relentlessly prowling camera, chiaroscuro set pieces that look like Doré engravings come to life, and a truly remarkable performance by Murnau regular Emil Jannings as the devil of your dreams (or rather nightmares). The Kino edition -- which as I suggested earlier, looks absolutely gorgeous -- is from an original German print with German titles (obviously), but there are optional titles in English..

Here's the trailer, which should give you an idea of how amazing the whole thing is.

All the films in the set come with newly recorded orchestral scores (the ones for The Last Laugh and Nosferatu are by the film's original composers), and there are fascinating bonuses on each disc (The Last Laugh has a making-of documentary that's particularly good). All told, then, this is a real treat for any serious film fan; the ninety buck price tag may be a little steep given the current economic climate, but if you have a little disposable income, I can't recommend it too highly. You can order it here, and I promise you will not be disappointed.

Most Memorable Screen Adaptation of a Literary Classic!!!

Just about perfect on every level, with the greatest catfight in screen history -- between Edna Mae Oliver and Blanche Yurka -- as the icing on the cake.

4. The Hunchback of Notre Dame (William Dieterle, 1939)
Yet another brilliant product of Hollywood's legendary annus mirabilis, and with the exception of a happy ending, a wonderfully faithful adaptation of the book. The black and white cinematography is so good you don't even miss Maureen O'Hara's red hair.

I may be cheating by including as recent (1961) a novel as a literary classic, but hey -- it's my list. In any case, a terrific realization of a supposedly unfilmable book, thanks (mostly) to Buck Henry's deft screenplay.

2. Lolita (Stanley Kubrick, 1962)
Another perhaps too recent to be a classic (see above) and supposedly unfilmmable novel that nonetheless works like crazy onscreen, whatever misgivings Kubrick and Nabokov may have had. As for Sue Lyons in the title role, only two words need be said: Woo and hoo.

And the most memorable film go at a highbrow lit source, this is strictly my opinion and it is mine and I have it, totally is -- 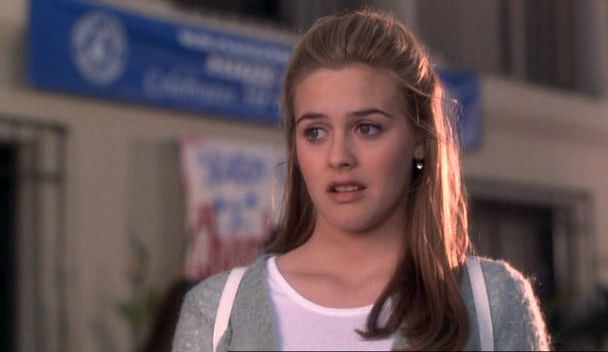 Jane Austen's Emma retooled for the 90201 set, and surprisingly faithful to both the letter and the spirit of the original, with an opening cellphone gag that still makes me laugh at loud.