A Room With a Foo 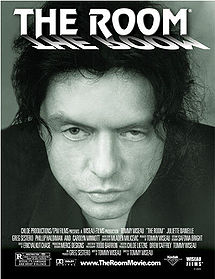 Okay, I'm shallow, I know, but few things in life irk me more than being totally clueless about some underground cultural phenomenon that most hepsters already know about. For example - slam dancing. Why didn't I get the memo on that at the time? I'm convinced it's something my second ex-wife and I would have enjoyed if we'd had the chance.

Oh well. In any case, it's time time for me to be irked again. Courtesy of constant reader Toonscribe (and yes, he is) I have just learned about a film of apparently transcendent amusing awfulness, and apologies if this is old news to you guys.

Ladies and germs, I give you the indie sensation The Room.

At a midnight screening in a Los Angeles multiplex, the atmosphere hovers somewhere between rambunctious and mildly terrifying. Late-night showings of cult films such as The Rocky Horror Picture Show and The Big Lebowski are known for their rowdy and strange behavior too. But people who go to see Rocky Horror and Lebowski think those films are good. Tonight's movie, an obscure, five-year-old drama called The Room, holds a different place in the hearts of those present at West Hollywood's Laemmle Sunset 5. ''It's absolutely terrible,'' says Chris Bonk, a talent-agency assistant who has seen the film more than 15 times. ''The script is not the best. The acting is certainly not the best. The music is horrible."

For those, like me, not heretofore in on the joke, The Room, from 2002, is a self-financed vanity production written and starring a guy named Tommy Wiseau, a former clothing saleman who speaks in a rich Schwarzeneggian accent. It seems to be about some kind of love triangle, and apart from unconvincing green-screen effects, subplots that are never resolved, and a big scene that compares unfavorably to James Dean's "you're tearing me apart" from Rebel Without a Cause (see trailer above), is just hilariously awful, or so I'm told. ''It is one of the most important films of the past decade,'' says Ross Morin, an assistant professor of film studies at St. Cloud State University in Minnesota. ''It exposes the fabricated nature of Hollywood. The Room is the Citizen Kane of bad movies.''

Well, we'll see about that; the existence of this film has exposed a gnawing void in my life, and now I'm off to Amazon to order the DVD version. If you feel the same, just click here. I should also note that Wiseau now claims the film's awfulness was deliberate -- I'll get back to you on that one after I've seen it.