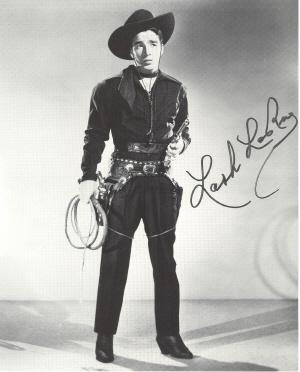 Well, folks, I had a troubling, and somewhat unexpected, thought this morning. Given the fact that one of the biggest heroes of my youth was a swarthy little guy dressed all in black leather who rode around the West with a toothess bearded old weirdo while flicking a bullwhip at total strangers -- how come I'm not in therapy?

In retrospect, of course, given the cultural ubiquity of Brokeback Mountain, the idea of a fetishist cowboy is not perhaps as far-fetched as it might have seemed at the time, but in any case I wasn't the only kid who dug him; LaRue was hugely popular at the end of the B-western film era, roughly from 1948 to 1951 (his comic book adventures routinely sold a million copies a month in his heyday), and the fact that he was the only cowboy star who talked like a big city, Humphrey Bogart kind of guy probably contributed as much to his appeal as his psycho-sexual subtext, bizarre as that might have been.

Here's the trailer to his biggest film, the aptly titled King of the Bullwhip (Lou Reed only wishes he'd come up with that one), to give you an idea of the man's possibly perverse charisma. Note also the presence of the aforementioned toothless, bearded old weirdo, played by the iconic comic sidekick Al "Fuzzy" St. John.

A few bits of LaRue trivia I was unaware of until recently.

•He taught Harrison Ford how to use the bullwhip for the Indiana Jones movies.

But this bit totally blew me away -- apparently, he was quite the hepster, and was a regular at the legendary jam sessions at the Dew Drop Inn in New Orleans.

The great rock and soul drummer Earl Palmer, who played on just about every hit record out of New Orleans in the 50s, recalls in his autobiography, Backbeat:

"Lots of white people wanted to come to the Dew Drop. Most were turned away, but they let a few in. Every time the cowboy actor Lash La Rue came in town, he came by. He played a hell of a guitar and was a regular guy [my emphasis]."

In any case, King of the Bullwhip is not currently on DVD, but there's a more than serviceable VHS copy floating around; you can -- and possibly should, at least if you're secure in your sexuality -- order it here.