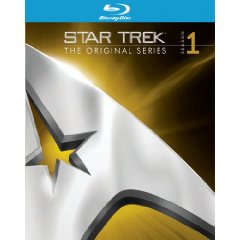 As some of you doubtless already know, I am not a Trekkie. Okay, I have the pajamas, but that's as far as I go.

However, if I were in fact the kind of person who wears a Star Trek: The Next Generation uniform to work on casual Friday -- I actually knew a girl who did that, but thank god she had the figure for it -- I would be extremely pleased right about now, and not just because the new Trek movie has turned out so well.

Karl Urban as Dr. McCoy rules, by the way. But I digress.

Anyway, in celebration of the new flick and all things Trek generally, CBS and Paramount have four ace new video packages in stores this week. The most interesting, for my money, is the Blu-ray box set of season one of the original series. Apart from the usual bells and whistles bonuses (an interactive Enterprise tour is especially cool), the set allows you to toggle between impeccably remastered versions of the episodes as they originally aired in the 60s and the recent updated versions with new CGI effects and 7.1 Surround Sound. I know some purists hate the latter, but I think they're terrific, so sue me.

CBS/Paramount is also offering a Blu-ray or DVD box set of the first six feature films (starring the original cast) in high def transfers and with the restored director's cut of The Wrath of Khan, which is vastly superior to the theatrical version. For the budget conscious, they've also got a similar package with Treks II-IV (same director's cut); both come with copious bonuses, including a commentary track with the guys who wrote the new film yakking about The Voyage Home, which is lots of fun. And there are two single disc DVDs with four well chosen episodes each of the original series -- including the brilliant Harlan Ellison-penned The City on the Edge of Forever (sans CGI) -- and Next Generation (including a Borg two-parter).

Of course, if I was in fact the kind of person who could tell you how to say "DVD" and "Blu-ray" in Klingon, the thing that would really get me excited is the free poster below. 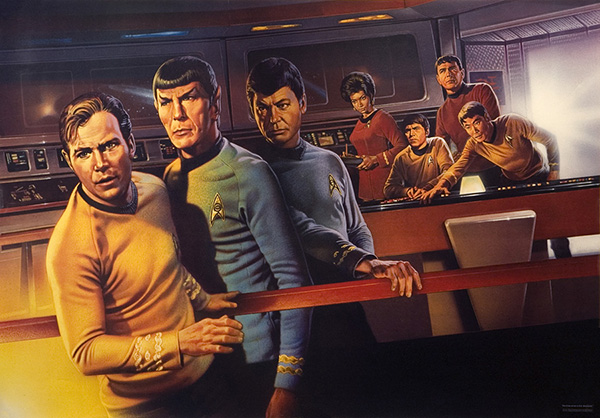 Which apparently can be yours with the purchase of any of the aforementioned videos. In a much larger version, of course.

Live long and don't breathe through your mouth, or what ever the expression is.

Tags: Star Trek: The Next Generation, Karl Urban, Harlan Ellison, The City on the Edge of Forever
Print