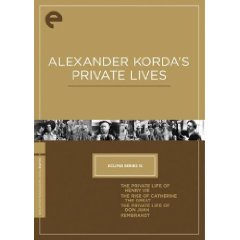 Video Event of the Week: Is it the beautifully remastered new MGM DVD version of the astoundingly unreal Technicolor musical The Goldwyn Follies (1938), starring Edgar Bergen and Charlie McCarthy? Might the newly minted Mirimax edition of the high class chick flick Enchanted April, with the great and thankfully not late Miranda Richardson, possibly get the nod? Or could the Anchor Bay Blu-ray of Last Chance Harvey, the thoroughly charming senior citizen romantic comedy with Dustin Hoffman and Emma Thompson, possibly be The One?

All worthy, to be sure, and I'm definitely gonna have a few words to say about the chick flick next week, but for my money it's the Criterion Collection's Alexander Korda's Private Lives, the latest budget priced ($47.96) four-disc set from their Eclipse Series. 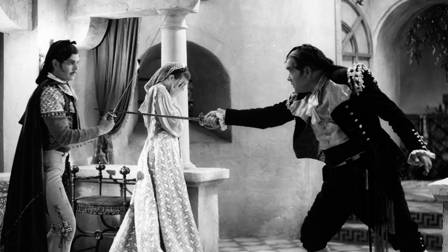 That's private lives as in bio-pics from producer/occasional director Alexander Korda, of course, with the centerpiece being The Private Life of Henry VIII from 1933, the lavish and often funny Charles Laughton vehicle that was one of the first big British international hits. The set also features a very dashing Doug Fairbanks Jr. in the battle of the sexes The Rise of Catherine the Great (1934), and Laughton again as Rembrandt (1936), a genuinely touching portrait of the great painter having money and romantic problems at the end of his life; it's one of Laughton's most inexplicably underrated performances. My favorite, however, is The Private Life of Don Juan (1934), Doug Fairbanks Sr.'s final film; a swashbuckler with tongue quite firmly in cheek, it gets considerable and surprising comic mileage out of the past his prime silent star playing (quite knowingly) a ladies man considerably beyond his sell date.

All four of these films have been previously available in pricier stand-alone Criterion packages, but the transfers here are the same ultra-high quality, and at the new bargain price you really can't go wrong. Bottom line: If you've got a little disposable income despite our current straitened economic circumstances, you might want to consider pre-ordering the set here. 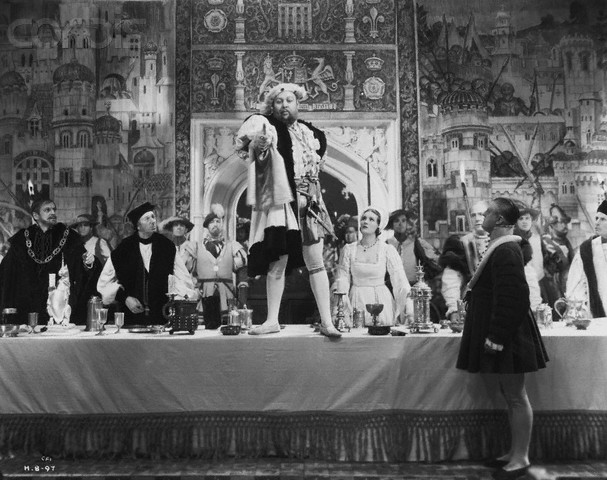 Bio-pics, obviously, but not strictly speaking limited to them.

Obviously, the is writer/director Cameron Crowe waxing autobiographical, although the lead character isn't actually called Cameron Crowe. On the other hand, Philip Seymour Hoffman does play the late great rock critic Lester Bangs, who I might add is the only person I have ever personally known who has been portrayed in a movie. Hoffman gets Lester's essential sweetness just right, BTW.

Brandon Fraser atoning in advance for all those crappy Mummy flicks with a wonderful performance as the gardener who insinuates himself into the life of aging Frankenstein director James Whale (Ian McKellan). I'm not sure it fully atones for the horror that was Inkheart, however.

George Hamilton as Hank Williams? Yeah, right. Possibly the worst bio-pic ever made, even with Hank Jr. dubbing dad's voice (Hamilton can't sing a lick, obviously). How bad is it? So bad I'm still amazed that fans never stormed a theater where it was playing to burn it down. In the immortal words of Herman's Hermits -- a must to avoid. 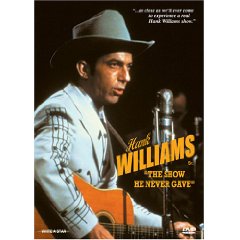 But the all-time coolest film about a real person, and in total and utter contrast to the above, obviously is --

1. Hank Williams: The Show He Never Gave (David Acomba, 1981)
An absolutely amazing film (a made for Canadian TV version of a London stage play), this stars charmingly monikered actor/singer Sneezy Waters as the country music legend right before the end. The premise: On the final night of his life (New Years eve, 1952) Williams (drunk and alone in the back of his long black limousine) imagines himself giving an impromptu two hour performance in a small back country bar, with his comments to the audience reflecting on his life. If you've never seen this, it's hard to convey just how emotionally devastating it is; Waters is utterly convincing as Hank, and the whole thing really feels like you're watching an actual event via some kind of supernatural time machine. It's a masterpiece, really, and why it isn't better known is beyond me. In any case, you can order it -- and goddamn should, immediately -- here.