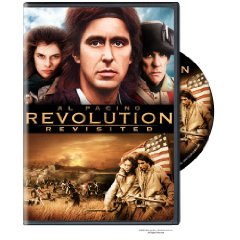 All worthy, to be sure, especially Children of Men, which is as close to a masterpiece as any film commercially released by a major Hollywood studio in the last decade, but for my money it's got to be Warner Brothers' new edition of Revolution, Chariots of Fire director Hugh Hudson's ode to the spirit of 1776. In a new director's cut -- excuse me, that's Revolution: Revisited -- with 40 minutes of new footage, but the same old Al Pacino with a Brooklyn accent.

I don't want to oversell what is still, I think, a problematic film, and not just because Pacino doesn't, shall we say, ring particularly true as a frontier trapper. Nonetheless, there are some interesting issues raised here -- the opening image is a statue of King George being toppled, which has a certain eerie resonance from recent events -- and there are undeniably stirring passages and some fine performances around the edges, particularly by Donald Sutherland as a supercilious Brit officer (and yes, that's Eurythmics singer Annie Lennox in an unflattering wig). In any case, the new version has been fitted out with a Pacino voice-over narration and the aforementioned extra footage that papers over some holes in the narrative, and the whole thing, at least in the abstract, looks and sounds great (and that includes the genuinely moving modernist orchestral score by John Corigliano). Bonuses include the negligible original trailer, and a new conversation between Pacino and Hudson that alternates rather amusingly between self-congratulatory (they're convinced it's a great film finally getting its due) and self-pitying (studio interference! studio interference!).

Nothing from the new version is on YouTube yet, but here's a battle scene to give you a vague idea of Hudson's rather deft widescreen compositions..

Warner Home Video is releasing the thing as an entry in their estimable "Director's Showcase" series, part four of which also includes new transfers of John Boorman's Beyond Rangoon, Michelangelo Antonionis Zabriskie Point, and David Cronenberg's M. Butterfly, films that aren't necessarily considered to be among their auteur's best but which may be ripe for reappraisal. I'll have more to say about these down the road -- suffice it to say I think the Boorman is a misunderstood masterpiece, the Cronenberg better than its reputation, and Zabriskie Point is still mishegass -- but in the meantime, if you've got a little disposable coin, you probably should check out Revolution: Revisited first.

In the meantime, and because things will be relatively quiet around here till Monday, here's a fun little project for us all: 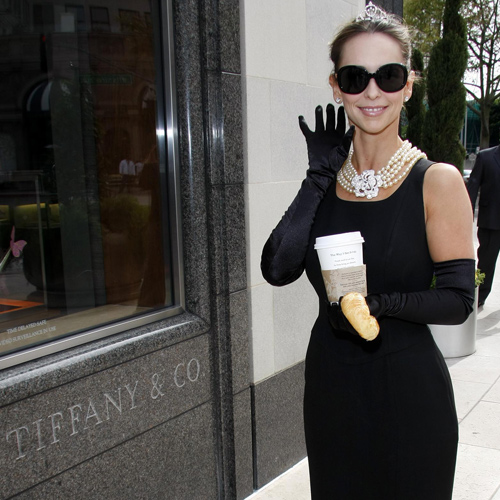 Oh please. All you have to do is say "Jennifer Love Hewitt as Audrey Hepburn" and the game is over.

And the all-time I Don't Think So casting, it's really not even worth arguing about, is obviously....

Nicholson as a dashing 19th century French cavalry lieutenant; I think the word you're looking for is....riiiiiiiight. To be spoken in rich, Bill Cosbyan tones.

Tags: Pigs, Pimps and Prostitutes, Shohei Imamura, Alfonso Cuaron, New in Town, Children of Men, Revolution, Chariots of Fire, Fear Strikes Out, The Day The Earth Stood Still, Much Ado About Nothing, Lenny, The Audrey Hepburn Story, The Terror
Print